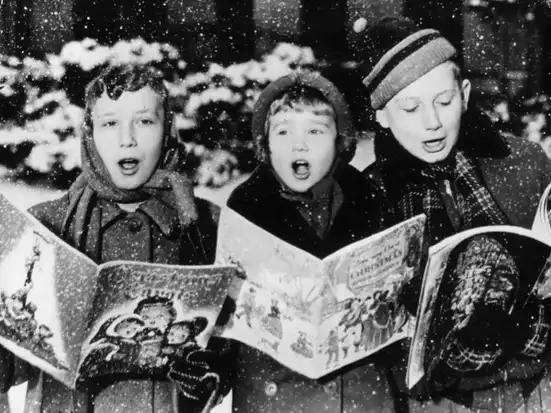 The Twelve Days of Christmas

The first verse of the Christmas carol, The Twelve Days of Christmas, evolved as a festive memory game. The list of objects or animals builds with each verse and forfeits are imposed for forgetting anyone.

According to one interpretation, the carol was created in the 16th century. The list of bizarre gifts given by the 'true love' became a secret code for Catholics. The 'true love' became God himself, the 'partridge' Jesus Christ. The 'two turtle doves' are the old and new testaments, 'three French hens' the Trinity, 'four calling birds' are the four Gospels, the 'twelve drummers drumming' the twelve points of the apostles' creed.

We Wish You a Merry Christmas

This carol reveals customs. Under the Tudor monarchs, wassailing and mumming were still practised, with carollers and players performing from door to door.

It was bad luck not to reward their efforts with food and drink, including the 'figgy pudding,' or Christmas pudding.

A favourite Welsh folk song during the 16th century we know today as Deck the Halls only acquired Christmassy words in the 19th century.

Deck the Halls had words that would not have suited the prim Victorians. In the 1860s, Thomas Oliphant changed the lines to suit the dancing melody and lively 'fa la la' chorus for the celebration of Christmas preparations.

The Holly and the Ivy

Silent Night was a favourite throughout the19th century.

One charming tale tells of mice chewing through pieces of St Nikola's organ, leaving the church without music on Christmas Eve 1818. Schoolmaster Frans Xaver Gruber and priest Joseph Mohr stepped in to save the day by composing a simple carol that could be sung with just guitar accompaniment.

Christmas earworms: the science behind our love-hate relationship with festive songs

Untangling the History of Christmas Lights