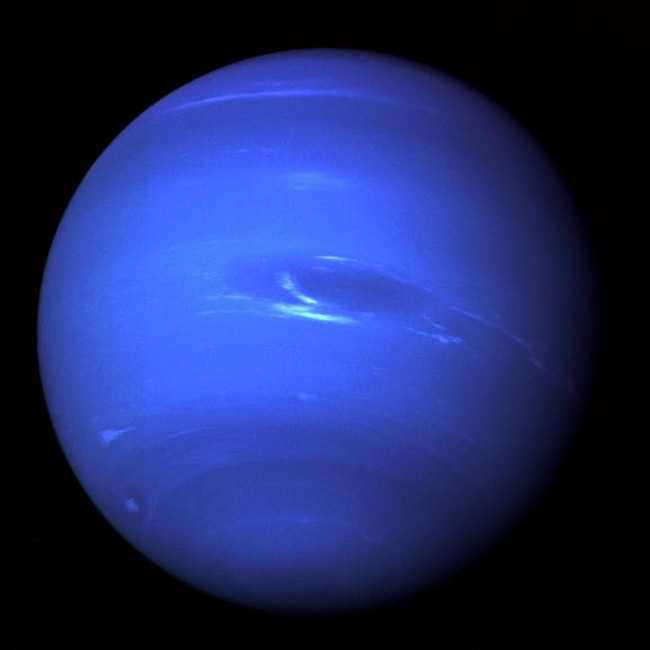 Neptune is so far from the Sun that high noon on the big blue planet would seem like dim twilight to us. The warm light we see here on our home planet is roughly 900 times as bright as sunlight on Neptune.

The ice giant Neptune was the first planet located through mathematical calculations. Using predictions made by Urbain Le Verrier, Johann Galle discovered the planet in 1846. The planet is named after the Roman god of the sea, as suggested by Le Verrier

With a radius of 5,299.4 miles (24,622 kilometers), Neptune is about four times wider than Earth. If Earth were the size of a nickel, Neptune would be about as big as a baseball.

One day on neptune takes about 16 hours (the time it takes for Neptune to rotate or spin once). And Neptune makes a complete orbit around the Sun (a year in Neptunian time) in about 165 Earth years (60,190 Earth days).

Sometimes Neptune is even farther from the Sun than dwarf planet Pluto. Pluto's highly eccentric, oval-shaped orbit brings it inside Neptune's orbit for a 20-year period every 248 Earth years. This switch, in which Pluto is closer to the Sun than Neptune, happened most recently from 1979 to 1999. Pluto can never crash into Neptune, though, because for every three laps Neptune takes around the Sun, Pluto makes two. This repeating pattern prevents close approaches of the two bodies.

Neptune’s axis of rotation is tilted 28 degrees with respect to the plane of its orbit around the Sun, which is similar to the axial tilts of Mars and Earth. This means that Neptune experiences seasons just like we do on Earth; however, since its year is so long, each of the four seasons lasts for over 40 years.

Neptune is one of the two ice giants in the outer solar system (the other is Uranus). Most (80 percent or more) of the planet's mass is made up of a hot dense fluid of "icy" materials—water, methane and ammonia—above a small, rocky core. Of the giant planets, Neptune is the densest.

Scientists think there might be an ocean of super hot water under Neptune's cold clouds. It does not boil away because incredibly high pressure keeps it locked inside.

Neptune does not have a solid surface. Its atmosphere (made up mostly of hydrogen, helium and methane) extends to great depths, gradually merging into water and other melted ices over a heavier, solid core with about the same mass as Earth.

Neptune's atmosphere is made up mostly of hydrogen and helium with just a little bit of methane. Neptune's neighbor Uranus is a blue-green color due to such atmospheric methane, but Neptune is a more vivid, brighter blue, so there must be an unknown component that causes the more intense color.

Neptune is our solar system's windiest world. Despite its great distance and low energy input from the Sun, Neptune's winds can be three times stronger than Jupiter's and nine times stronger than Earth's. These winds whip clouds of frozen methane across the planet at speeds of more than 1,200 miles per hour (2,000 kilometers per hour). Even Earth's most powerful winds hit only about 250 miles per hour (400 kilometers per hour).

In 1989 a large, oval-shaped storm in Neptune's southern hemisphere dubbed the "Great Dark Spot" was large enough to contain the entire Earth. That storm has since disappeared, but new ones have appeared on different parts of the planet.

The main axix of Neptune's magnetic field is tipped over by about 47 degrees compared with the planet's rotation axis.

Like Uranus, whose magnetic axis is tilted about 60 degrees from the axis of rotation, Neptune's magnetosphere undergoes wild variations during each rotation because of this misalignment.

The magnetic field of Neptune is about 27 times more powerful than that of Earth.​

Neptune has at least five main rings and four prominent ring arcs that we know of so far.

Starting near the planet and moving outward, the main rings are named Galle, Leverrier, Lassell, Arago and Adams. The rings are thought to be relatively young and short-lived.

Neptune's ring system also has peculiar clumps of dust called arcs. Four prominent arcs named Liberté (Liberty), Egalité (Equality), Fraternité (Fraternity) and Courage are in the outermost ring, Adams. The arcs are strange because the laws of motion would predict that they would spread out evenly rather than stay clumped together. Scientists now think the gravitational effects of Galatea, a moon just inward from the ring, stabilizes these arcs.

Since Neptune was named for the Roman god of the sea, its moons are named for various lesser sea gods and nymphs in Greek mythology.

Triton is the only large moon in the solar system that circles its planet in a direction opposite to the planet's rotation (a retrograde orbit), which suggests that it may once have been an independent object that Neptune captured. Triton is extremely cold, with surface temperatures around minus 391 degrees Fahrenheit (minus 235 degrees Celsius). And yet, despite this deep freeze at Triton, Voyager 2 discovered geysers spewing icy material upward more than 5 miles (8 kilometers).

Triton's thin atmosphere, also discovered by Voyager, has been detected from Earth several times since, and is growing warmer, but scientists do not yet know why.

Neptune's environment is not conducive to life as we know it. The temperatures, pressures and materials that characterize this planet are most likely too extreme and volatile for organisms to adapt to.