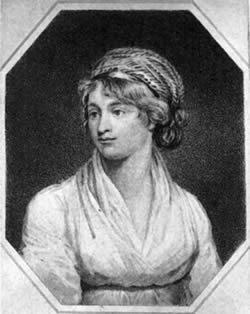 A new biography of Mary Wollstonecraft, an English writer of the 18th century, author of a famous treatise on women's rights, wife of the philosopher William Godwin and mother of Mary Shelley, author of the well-known story of Frankenstein, has recently been released in England. In the seventies the international feminist movement had as its slogan: "The personal is the political". Mary's life was, in fact, a personal fact that later became a political fact, with the character of a "mantra", a vibration in the meaning of the Indian word, a "politics" in the Western cultural meaning.

A "life for three"

Mary placed the "home" at the center of her philosophy, her life and her work were governed by the struggle for women's emancipation. Unfortunately, the fact that everyone was aware that she was dealing with two lovers and that she had offered them a "life for three", that she had an illegitimate daughter and that she had attempted suicide, all these facts destroyed her reputation. It was only in the seventies of the twentieth century, two centuries later, that Mary re-emerged as the forerunner and mother of feminism.

Many critics and historians believe that Wollstonecraft's genius is to be sought in her life. According to another great British feminist, Virginia Woolf, her genius is to be found in the fact that from the very beginning, her life was an experimental life. She was the daughter of an idle drunkard and she immediately learned how to live alone by choosing one of the most impossible professions for that time: the writer.

We find nineteen-year-old writer Mary walking alone through London at night returning from a literary evening with her editor Joseph Johnson and other members of the radical circle frequented by men like Paine, author of "Human Rights", by William Blake, poet and immortal painter, Erasmus Darwin, the great painter Fuseli. Frequencies and acquaintances made in the name of a clear existential and cultural independence, unthinkable at that time, in that type of 18th century English society.

It was the time when women would never dream of studying botany due to the female sexual references of plants in Darwin's studies, a time when women had no right to make a career, could not have access to their money , they did not possess their own body from a strictly physical point of view, the children did not belong to them. In short, they were just toys in the hands of men. Marriage was nothing more than "legalized prostitution", as Mary herself said in her famous book on Rights.

"The Rights of Women" was published in 1792 and gave her immediate fame. She enraged classical and conservative poets like Horace Walpole who called her "a hyena in a bra". She blanched many alleged radicals, both politicians and writers and pundits of a press that was only male and conservative. Mary, in the book, violently supported the right of women to education, emancipation, liberation from a state of humiliating male servitude, stating that it was not true that men were beings with reason and women only emotions.

Instead, she argued that marriage was the right balanced fusion between the two sexes, a cornerstone for maintaining relations between the sexes and therefore the foundations of civil society. Despite having written novels, manuals and educational anthologies, the essay on "Women's Rights" is her real intellectual testament. Mary is not only a completely new and unexpected feminist icon on the English scene of the late eighteenth century. It fits well into the current of the European Enlightenment that flows freely into Romanticism to change and transform itself into Cultural Politics.

In her passionate and painful life, the confluence of the Enlightenment in Romanticism became a real bloody battle as evidenced by one of his letters: "I am a real animal and instinctive emotions too often silence the suggestions of reason ... aware that life is just a game, often just a nightmare, yet every day I am looking for something serious, worthwhile, but I am always disillusioned ”. The letter was written after Fuseli's refusal to live together in three. An exasperatingly romantic Mary, substantially raw in her exasperation, but serious in her rationalistic enlightenment.

Her Life a Continuous Experiment

Mary made her life a continuous experiment. Rejected by Fuseli, she left England and followed the French Revolution in the days of terror, like a modern journalist who goes to the front. She embarked on a trip to the Scandinavian countries and found herself with a daughter writing her extraordinary letters of hers from Scandinavia, Sweden, Norway and Denmark. It was these letters that transformed the philosopher William Godwin from admirer into lover of her. The marriage was her last but "fruitful experiment", as Virginia Woolf called it. A life of "experiments" done on his own skin.

Mary is the portrait of a courageous, irritating, attractive, passionate, instinctive, sometimes brutal woman. Her fame was greatly damaged by the revelations that Godwin himself made when he published some private details in his Memoirs out in the same year as Mary's Memoirs, discrediting her in the eyes of feminists. After all, many modern biographers tend to think that Mary's effort was aimed at giving women a new and different condition made up of redemption and the search for identity, but also to help "create" a "new man", in the game of relationships and balances between the two sexes.