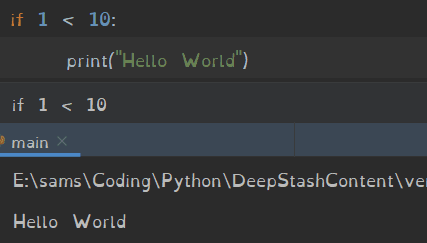 As you can see in the image, we are working with conditional if statements. This is used to find out if something is True or False. As you can see i used '<', this means less than, so in this statement i am asking is '1 less than 10' and if true it will run the print inside. There is one key difference here than normal prints that we have done and that is the indent, this is saying if the if statement is True then go in to the scope, the indent and run all the code in there then move on.

Next part more on if statements.

Dont for get to join discord for help

In this part we will be going over more on variables and printing them.

So let's make a variable and give it the value of 10, so it should look something like this X = 10, X could be any word really just not a reserved word, here is a link to a website with alot of reserved words that can't be used https://realpython.com/lessons/reserved-keywords/.

and scroll down a little and you will see key words.

So like before very simply print(x), as you can see in the image above. Now lets run and se the output which in this case be 10.

For todays part we, are looking at basic numerical operators. In the image i have created 2 integer variables and then in the print i have used both variables and then used the operator inbetween them, so to add them we use '+', to subtract '-', mulyply '*' and finally divide '/'.

Next lesson will be about what happens if you added a string and integer together.

Learning Python: More on for loops

Just like last week i have created a for loop, but instead of only one number in the brackets.

The first number is the starting value and the second value is the highest, so in this case i have put 10, 100 so the range is 10 to 99, the last number which i put as 5, is the steps, so every 5 numbers it will do what is in the for loop. This could be any number range, plus it can go the other way aswell, so when you make the for loop in the pair of brackets put 100, 0 , -1 and it will count down instead.

For loops can also be used to iterate through lists, but that is the next lesson