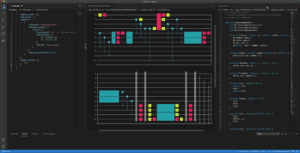 TQD Exclusive: A Classiq Solution to a Current Quantum Challenge

MORE IDEAS FROM TQD Exclusive: A Classiq Solution to a Current Quantum Challenge

The software acts like “VHDL for Quantum,” injecting a high-level functional model and turning it into a gate-level quantum design.

this ultimately puts the power of quantum computers in the hands of more people, who can then use their creativity and knowledge to enable quantum solutions for a wide variety of industries and use cases.

Many users worry that each quantum company that comes along will require a steep learning curve, with more technological integration and additional languages to learn.

Enterprise quantum teams that are interested in developing applications or algorithms for quantum computers are choosing Classiq. The company is also developing ties with academia. Additionally, it has deep partnerships with the leading hardware providers.

Since its inception in late 2019, the company secured a total of about 18 million in funding from leaders in venture capital, including Team8 and Wing Venture Capital , Entrée Capital , OurCrowd, and IN Venture , the corporate venture arm of Sumitomo Corp.

Minerbi estimates that only a few thousand people in the world can design a 10-qubit quantum circuit. That number falls to a few hundred experts who can design a 50-qubit circuit.

With Classiq, organizations can combine the power of elite quantum scientists with domain-specific experts as well as other individuals within their enterprises. These integrated teams can engineer solutions to the world’s most pressing problems.

“We want to enable the quantum experts to do the high-level design, but, in parallel, enable domain experts who are not quantum specialists to participate in and contribute to the quantum algorithm design process.”

Not a New Problem

If you want to design a simple electronic chip with storage, a simple printed circuit with a few dozens of classical gates — like AND gates and NOT gates — that’s a complex design problem, but you can still do it manually,” said Minerbi. “However, you can’t design circuits with millions or billions of transistors in the same way. Luckily, you don’t need to because, in the classical electronic design process, there are high-level modeling languages like VHDL and Verilog that define what functionality you want to achieve out of the circuit without requiring you to define the implementation

Satisfying the designer’s requirements and constraints

The Classiq platform gets inputs from a high-level functional model and the constraints the designer needs to meet. It uses a constraint satisfaction engine to fulfill the requirements while meeting the constraints.

you get two things: a synthesis of a quantum circuit from a high-level model, and an excellent optimization because the model knows the hardware constraints as well as the high-level requirements

Why it’s time to prepare for a quantum attack - teiss

The power of a quantum computer

A conventional computer uses electricity within its silicon chips. Small amounts of electrical current are turned on or off. It represents true and false, or the binary numbers one and zero.

But a quantum computer changes individual quantum elements such as electrons or photons, called qubits. Due to their 'spin', electrons can be up or down, and photons vertical or horizontal at the same time. This quantum superposition means that a qubit is in both states at once.

How a quantum computer is different from your laptop, explained by a scientist