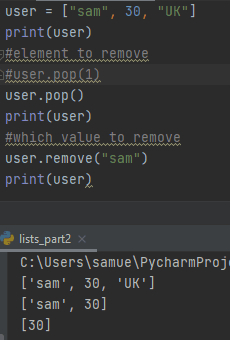 In todays image we can see that i am using two new keywords, remove and pop.

The best way to think about it is that pop "pop()" removes the last element from the list, or you could put a index value, so in this case in the image i have put 1, this is the second element because python starts with 0. Next we have remove and this wants to know the value you want to remove, so in this case i entered a string, and it removed it from the list.

If you was to put "name = user.remove("sam")" it would take out the value from the list and put into the variable to be used later.

learning is the best this we can do to better our selves, teach each other