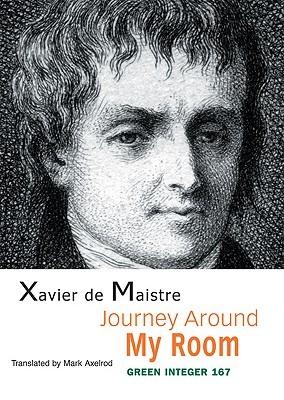 In 1790, Xavier de Maistre was 27 years old, and a soldier in the army of the Sardinian Kingdom, which covered swathes of modern-day Northern Italy and Southern France.

An impetuous young soldier, he was placed under house-arrest in Turin for fighting an illegal duel; there is no record of what happened to the other guy. It was during the 42 days of his confinement here that he wrote the manuscript that would become Voyage autour de ma chambre.

A Journey Round My Room

Inspired by the works of Laurence Sterne, with their digressive and colloquial style, de Maistre decided to make the most of his sentence by recording an exploration of the room as a travel journal. Like a modern teenager cataloguing their daily routine in a series of finely-tune...

Night Voyage Around my Room

He went on to join the Russian army, and moved to Saint Petersburg, where he wrote a sequel, Night Voyage Around my Room. It was clearly a difficult follow-up: he began writing it in 1799, but didn’t finish it for another twenty-five years. The edition featured here is an 1871 translation into En...

De Maistre reportedly did not think much of the work, but his elder brother Joseph, the renowned philosopher and counter-revolutionary, was so impressed with what he read that he arranged for it to be published, much to his younger brother's surprise. By the time of its publication in 1794 Xavier...

But you must not let yourself think that instead of keeping my promise to describe my journey around my room, I am beating the bush to see how I can evade the difficulty. This would be a great mistake on your part. For our journey is really going: and, while my soul, falling back on her own r...

It parodies the travel journals of the eighteenth-century (such as A Voyage Around the World by Louis de Bougainville, 1771), and could be read today as an early take on the modern vogue for "psychogeography" — each tiny thing that he encounters sends de Maistre into rhapsodies, and mundane journ...

Going through a rough phase in life where translating my philsophy of life into engineering of life. Thank you for this opportunity share my stoic algorithm with you.

Things to Keep In Mind During Early Career Journey

helps me quanitfy my 21 grams of life :) hope it helps if you are reading, let me know in the comments.

My Guide for Life