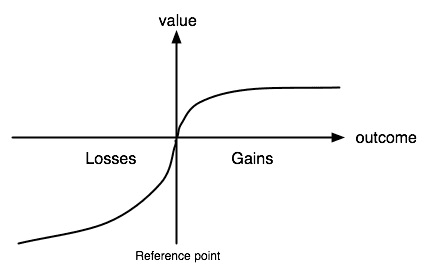 Prospect theory is an improved version of the previous utility theory.

Utility is instead based on differences from the reference point.

Humans have, by default, some degree of loss aversion, so the absolute utility of a loss will be perceived as greater than one of an equal gain. A survey found that people would refuse a bet where they would gain $100 with a 50% chance and lose $100 otherwise. In fact, they would not accept until the gain is at least twice as big, depending on their degree of loss aversion.