Getting married as a minor of age - Deepstash

Getting married as a minor of age

In the Middle Age, one only needed to have reached the age for puberty in order to be able to get married.

Furthermore, the parents' approval was not even necessary. However, rules like asking for your landlord's consent or marrying only persons from the same class were given a lot of importance.

How And When Did People Get Married In The Medieval Period?

MORE IDEAS FROM How And When Did People Get Married In The Medieval Period?

Divorces in the 12th century

Even back in the Middle Age, some individuals were not taking marriage seriously and, therefore, the number of divorces was quite impressive.

This would happen despite the declaration in the 12th century of the sacred character of the church. 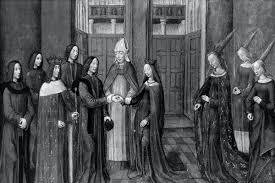 In the Middle Age, Christians did not need to marry inside of the church: whenever they came to the consent over the union, they could get married anywhere.

The difficult part was proving that the marriage had taken place though.

Persons related as well as godparents and godchildren were not allowed to marry each other in the Middle Age. Furthermore, the first interdiction could actually serve as reason to undo the marriage.

Consent to get married

Back in the Middle Age, the consent to get married could be either verbal or physical. Sexual intercourse counted as physical consent.

On the other hand, giving your word to marry somebody or offering a gift to that person, even without having a sexual relationship, would also lead to marriage.

Stopping a marriage from happening

The famous 'speak now or forever hold your peace' did not use to exist in the Middle Age.

This allowed for new marriages to take place, as past secrets would come up only after the marriage had been celebrated.

Witnesses and the marriage

Even though strongly recommended to take place in the presence of witnesses, marriages in the Middle Age would often include only the presence of the two persons wanting to get married.

The marriage and its validity

Back in the Middle Age, divorce was not really an alternative. Furthermore, rules like being married to a single person at a time or being allowed to marry only a Christian were given high importance.

The Intense Crowding After Thanksgiving

In 1960's, the Philadelphia Police Department became so frustrated with the overflowing streets, traffic jams and regular fights caused by the crowds of people that visited the stores the day after Thanksgiving that, it’s believed, they coined the name ‘Black Friday’ in the hope of dissuading people from heading to the shops.

It completely failed, but the name stuck.

According to a study in Applied Research Quality of Life, single people tend to be happier than the married ones, as they are more socially active.

Therefore, it is these very social interactions that contribute to single people’s increasing happiness, as they spend more time with their social circles.

One Key to Being Happy When You're Single

Marriage - a shift in meaning

For many people, a wedding is no longer the first step into adulthood, but often the last step.

It is a celebration of what two people have already accomplished, unlike the traditional wedding that celebrated what a couple would do in the future.

Marriage Has Become a Trophy