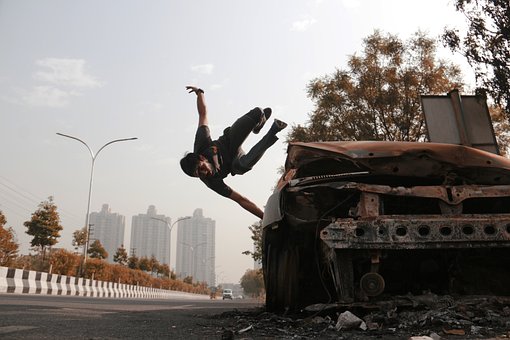 The Birth of Parkour

The concept of Parkour was thought of by a then-teenager named David Belle in a small place called Lisses, near Paris, France. His father, Raymond Belle was a hero fireman and acrobat. This was in the 90s, and the teenager was greatly influenced by Spiderman and Tarzan. His acrobatic ways made him a celebrity and created a huge fan following.

Parkour is a made-up word, cousin to the French parcours, which means “route.”

A prominent disciple of Parkour is Mark Toorock, from Washington DC, who follows David Belle, and hosts a website called American Parkour (at the beginning of the 2000's)

He was impressed by the stunts and the daring shown by David and has followed it in a low-key (less dangerous) way.

The world of climbing walls without stairs and jumping off rooftops without any rope or parachute is filled with risk, thrill and adventure.

It also has its own naming system. Someone practising parkour is called a ‘traceur’, someone who traces David Belle’s footsteps. A female traceur is called a traceuse.

... was modelled by Leonardo DiCaprio in the 2013 Hollywood adaptation of his life. It’s undetermined whether or not Belfort actually pays back the $110 million he stole from his investors that landed him in jail. He was convicted of fraud and stock market manipulation.

Lessons From the Real Wolf Of Wall Street

There is a significant relationship between competitive profit gains and diversity.

Genius is not tied to age

Economist David Galenson decided to find out whether the assumption is true that creativity, when discovered early, burns brightly, and then die out at an early age. He found that is what not so. Some are late bloomers. Mark Twain published "Adventures of Huckleberry Finn" at forty-nine. Daniel Defoe wrote "Robinson Crusoe" at fifty-eight.

Why Do We Equate Genius with Precocity?