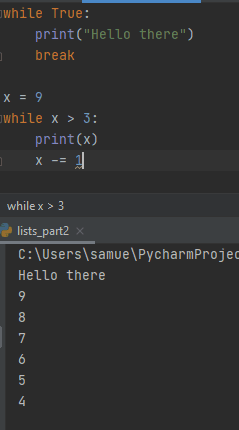 The way i see it is while loops work like if statements but in a loop. Lets just think about it, if statements need a condition to run the code in its scope,  a while loop only runs the code in its scope if the condition is true, in this case i did a while True, this would technically run for forever and not stop but i put a break in which stops as soon as reaches this point, in the next loop i added a condition which, but in the scope i am removing 1 from x, which eventually then will make the condition false which then stops the while loop cause the condition is false.

this will explain a little about while loops

This is all stuff that I have in a 'vision and principles' board at home.

Blueprints for a growth mindset

Blueprints for a growth mindset

Being A Good Leader

Being A Good Leader