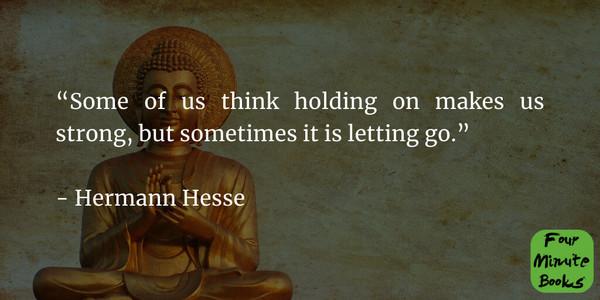 Siddhartha presents the self-discovery expedition of a man during the time of the Buddha who, unsure of what life really means to him, takes an exploratory journey to pursue the highs and lows of life, which ultimately leads him to discover the equilibrium in all things and a higher wisdom within. 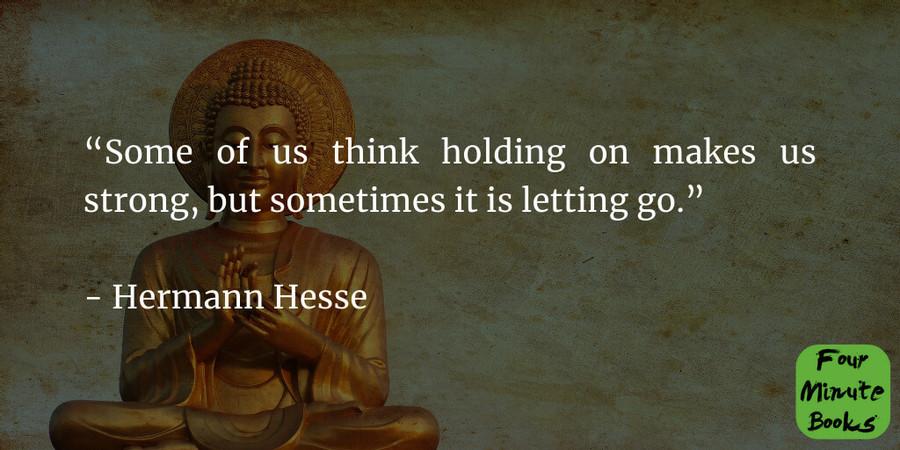 "Some of us think holding on makes us strong, but sometimes it is letting go."

Siddhartha is a young Brahman to whom common pleasures like food, companionship, or wealth are not satisfying enough. His soul is searching for a higher meaning in life. Therefore, he sets a goal to move past fear and experience the contrasts and divergences of the world.

His journey takes him from wealthy and luxurious beginnings to a humble life in which he gives up all comforts. He soon becomes unrecognizable from starvation and sunburn, but he feels more fulfilled than before. By experiencing life’s contrasts, Siddhartha learns more about himself than he ever has.

Siddhartha meets Govinda, a friend from childhood who is also seeking self-realization. They discover that desire causes suffering because it makes humans attached to things they want but do not have.

The secrets of enlightenment may be easier to uncover than you think, and these lessons will prove it to you!

Lesson 1: True harmony comes from living peacefully with oneself and finding balance between spirituality and materiality .

The story of Siddhartha’s journey to enlightenment is a story of the interplay between materiality and spirituality. At first, he thinks that the material world is all there is. But then he realizes that it’s not complete without the spiritual one, and vice versa.

The book is a story of discovery — of the world, of himself, and of his purpose in it. Siddhartha begins as a young man who is unsatisfied with his life. He adopts a life of asceticism to discover enlightenment. But then he realizes that this path is incomplete without the physical world.

He then moves to the other extreme and lives as a materialist by having a well-paid job, being with a woman, and indulging in consumerism, good food, as well as bodily pleasures. However, he finds this lifestyle lacks spirituality so he decides that there must be an equilibrium between the two.

Siddharta finds balance where spirituality meets the materialistic world from a fisherman who tells him that the river holds all secrets. The river is coming and moving into the oceans, which is a great representation of how everything in the universe interconnects, including these two worlds.

Lesson 2: Just as Siddhartha found a light in the fisherman, we must look for our own source of enlightenment and follow it .

In life, we all have to find our light or goal and reach it to fulfill ourselves. In this novel, the fisherman represents Siddhartha’s goal of enlightenment and freedom from his suffering.

Because he was so entranced by the beauty of nature, the fisherman has no desire to be a part of society’s rules or expectations.

He is an outsider who lives in his own world and only gets involved when it suits him. He has no ambition beyond what he needs in order to live comfortably. The fisherman catches fish as they come out of the water to eat them once they’ve been hooked on his line.

When Siddhartha meets him first as a young man and again later in life after many years have passed, he finds himself attracted to this lifestyle. That’s because it seems so freeing compared to what he has known before then.

When you let go of society’s expectations and learn what fulfills your soul both through the spiritual and physical world, you’ll know what you have to do. Once you set your mind and heart to follow that purpose, you’ll findenlightenment as well.

Lesson 3: The Universe is made of all things combined, living in a harmonious union .

The universe is highly interconnected and vast. It’s almost as if there is no beginning or end to it, which makes it as mysterious as it is beautiful. To understand this magnitude of information, Siddhartha turns to the river.

As he travels in the forest, Siddhartha encounters many experiences that change his life forever. He learns that all things are connected: by nature, by their environment, by their purpose, by their thoughts.

The river is used as a metaphor for this idea. It comes from a mountain stream and eventually flows into an ocean. As Siddhartha watches it flow through every stage of its journey, he realizes that he himself is just like the river. He has come from somewhere else and will eventually return in nature.

He sees that he can learn from everyone around him because they have all been through similar experiences as him before; yet each person has his own unique way of seeing things that makes them unique too.

Siddhartha is a young man who leaves home to find meaning in life. He meets many people on his journey who help him find inner peace and enlightenment. The book teaches us that if we want to be free from desire and find peace within ourselves, we must reach nirvana (a state of blissful emptiness).

This lecture is not a guide to meditation or a self-help book, but rather a pleasant and empowering tale that will change your perspective on life forever. Better yet, it’ll help you understand what it means to have inner peace with yourself as well as with others around you.

Who would I recommend the Siddhartha to?

The 40-year-old person who feels troubled in their soul even though they’re fulfilled professionally, the 33-year-old who had a life-altering experience and wants to reconnect with their higher being, or the 20-something-year-old who achieved conventional success early in their life and is now looking to embrace spirituality.

Why the Mentor Is an Important Role in Satisfying Stories