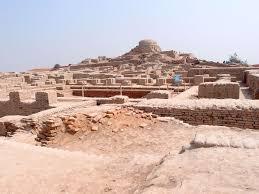 Mohenjo-Daro is a city in today's Pakistan that pioneered new standards of urban sanitation. Mohenjo-Daro was the earliest and largest urban center of the ancient Indus Valley civilization, constructed circa 2500 BCE.

The people of the Indus Valley civilization invented new water supply and sanitation devices, including piping and a complex sewage system. Most of the city's houses had indoor baths and latrines with drains. This civilization is thought even to surpass the plumbing system of the later Roman civilization.

Humanity has been vulnerable to rapidly spread illnesses because disease propagates more easily in concentrated populations without adequate sanitation.

Advances in sanitation have allowed people to live near one another in cities with less risk to their health, in particular, safe disposal of effluent to spare the water supply from contamination.

The Indus Valley civilization arose in the floodplains of the Indus and Sarasvati rivers around 5000 years ago.

In the largest structure in the city Mohenjo-Dar was an immense, elevated public bathhouse, measuring almost 900 square feet. The status of the bathhouse as the city's largest structure suggests that the people highly valued cleanliness.

The washrooms in the homes of Mohenjo-Daro were typically small. The brick pavement floor was sloped toward a corner where the drain was situated. The room contained a simple latrine and a washing area.

Homes with a washroom on the upper floors were fitted with vertical terracotta pipes that carried effluent down to the street-level. Wastewater flowed down into the drain ditches that ran along every avenue in the city, then into underground tunnels that carried waste away from the city.

Progress is not linear

Mohenjo-Daro’s advanced plumbing reminds us that progress is not steady or linear. Many people that lived thousands of years later coped with less hygienic conditions.

It was not until the 19th century that urban sanitation became widespread, causing a decrease in water-borne illnesses. While more people now enjoy proper hygiene, far too many people are still living with inadequate sanitation and accompanying diseases.