Icebergs and glaciers often appear blueish green. This is because the air bubbles that accumulate on top of an iceberg get compressed, and more light penetrates the ice.

Longer colour wavelengths like red and yellow get absorbed by the ice, while shorter wavelengths of colour like blue and green reflect the light.

Ice on other planets

The most effective method to prevent food from spoiling was to preserve food with blocks of ice. In the early 1800s, ice harvesting was an industry where horse-drawn ice cutters pulled thick ice blocks from frozen lakes for use in insulated ice houses and cellars.

By the late 19th century, household iceboxes were common. Later it was replaced by the modern electric refrigerator. 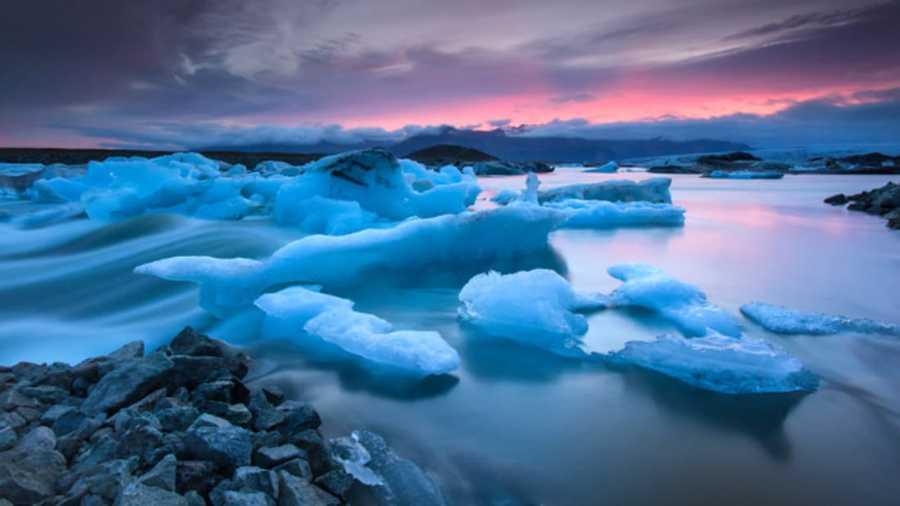 The cryosphere - ice on earth

Ice provides most of the world's fresh water supply, keeps sea levels from rising dangerously, and gives us important information about past and future climate.

Ice on Earth is named cryosphere - the frozen water part of the Earth system. It includes all types of frozen water, including permafrost, which is soil that has been frozen for extended periods.

Ice storms happen when snow enters a warm layer of the atmosphere and melts into raindrops. Then it passes through a cold layer of air. As the rain falls through the thin cold layer, it immediately turns to ice, resulting in a thick coating of ice that turns sidewalks and roads into skating rinks.

The thickened ice on power lines and trees can snap cables and branches, leading to widespread power outages and falling tree limbs.

Greenland's ice sheet is the second largest ice mass on Earth after the Antarctic ice sheet. It contains 10 percent of the world's glacial ice, and it's melting at a whopping 8000 tons per second.

More than two-thirds of Earth's fresh water is stored in glaciers. The loss of all the ice from melting glaciers will affect the global water cycle and considerably impact water supply and quality, energy generation, and incidences of extreme weather.

Climatologists drill cylinder-shaped samples of ice from glaciers, then analyse the dust, minerals, ash, gas bubbles, and pollutants that have collected in snow for millennia.

Water is usually denser than ice

Water and ice are made of the same stuff. In water, molecules can fill in gaps and pack themselves more tightly, while ice is less dense and therefore able to float on water.

However, heavy water ice sinks. (Hydrogen atoms have a proton and a neutron, but only a proton in normal hydrogen.) It may be because heavier hydrogen atoms cause the water molecules to become heavier, and the hydrogens form stronger bonds.