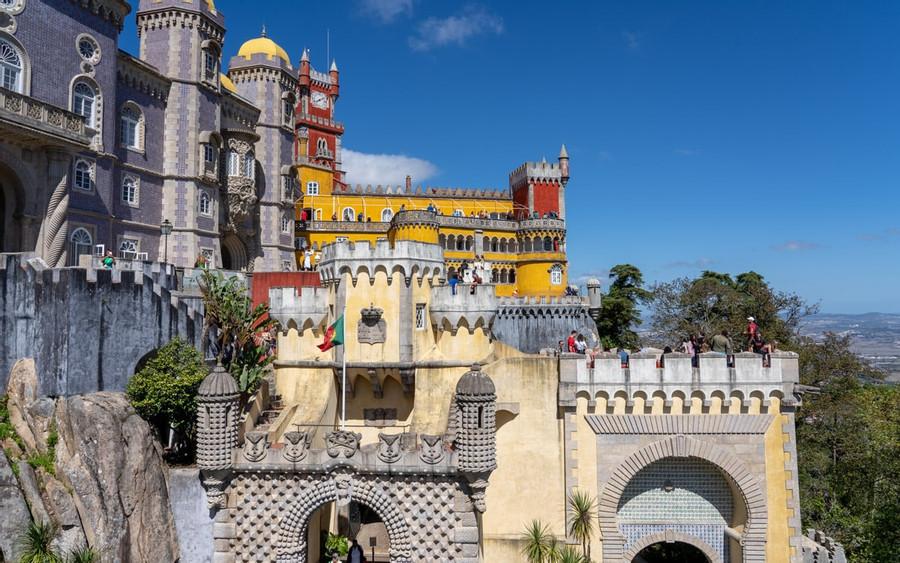 Located in the hills above Sintra is Pena Palace (Palácio da Pena) , a colorful Romanticist castle.

The exotic castle, a fine example of 19th-century Romanticism, combined Medieval and Islamic elements into its design. After the Republican Revolution of 1910, the palace turned into a museum. Today, Pena Palace is one of the most visited museums in Portugal.

It also is an UNESCO World Heritage Site and national monument. Surrounding the palace is an expansive park. In the park are exotic plants and trees brought in from around the world including Japan, New Zealand, and United States.

The Seven Wonders of Portugal

Castle of Guimarães is a medieval castle located in Guimarães. The city is located about 42 kilometers (26 miles) northeast of Porto. Guimarães is a walled city first settled in the 9th century.

Alcobaça Monastery is a Cistercian abbey church and monastery.

Batalha Monastery is a Dominican convent located in the town of Batalha. Its official name is the Monastery of Saint Mary of the Victory. The monastery, which celebrates a medieval battle, is considered to be one of Portugal’s finest architectural achievements.

The Castle of Óbidos (Castelo de Óbidos) is a well-preserved medieval castle located in Óbidos.

Da Vinci's To Do List: Inside the Mind of a Genius

A list of some of the oldest and finest museums in Europe that you can still visit.

10 Most Beautiful Natural and National Parks in Portugal