The first picnic appeared in Les Charmans effects des barricades (1649), a burlesque satire on the perceived hypocrisy of the Fronde.

The main character, ‘Pique-Nique,’ is a glutton just like his friends, which stands in contrast to the food shortages caused by the rebellion. His name probably referred to an excessively large meal, enjoyed at other people's expense.

The History of the Picnic

MORE IDEAS FROM The History of the Picnic

During the 18th century, picnics became a pastime of the aristocracy and were a purely indoor affair. Attendees were still required to contribute by either bringing a dish, a drink or pay a share of the cost.

Picnics were associated with conversation and wit and seen as intellectual refinement. At a larger gathering, there was also music or dance - similar to a ball or party. 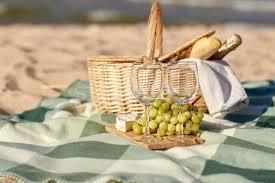 In the 20th century, new modes of transport (trains, bicycles, and motor cars) made the countryside accessible to a greater number of the population.

Not long after, their popularity had grown so much that specialist picnic baskets were produced, and the contents became more standardized. Today, olives, focaccia, and white wine are more likely to be found in a picnic basket rather than cold tongue, cress sandwiches, and ginger beer.

After the French Revolution, most aristocratic picnickers fled abroad to Britain and introduced the picnic to England. This led to a less refined and more raucous picnic, thanks to a 'Pic Nic Society,' founded by wealthy young Francophiles. Every member was required to bring a dish and six bottles of wine. Dinner was followed by singing, dancing, and gambling.

Picnics were also taken up by the emergent middle classes and moved outdoors. The result that picnicking ceased to be associated with music and dancing and became a simple meal. It became calmer and more innocent.

What a load of BS, Lisbon is neither small nor walkable..