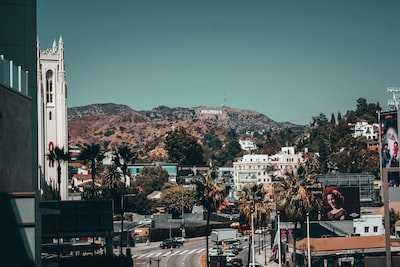 The place where Hollywood stands today was initially just plains and hills with just a small hut, in the year 1853, eventually becoming an agricultural community called Cahuenga Valley. Harvey Henry, a politician and real estate developer purchased a large piece of the future ‘Hollywood’ for a ranch and ended up using it as a township of upscale homes. In a couple of decades, the place had markets, hotels and other commercial establishments.

The Father Of Hollywood

.. was a banker and real estate mogul H.J. Whitley, who opened the Hollywood Hotel(Now Dolby Theater, the Oscar ceremony venue) and some residential neighbourhoods. According to many, he coined the name ‘Hollywood’ while honeymooning there in 1886, while some say it was named by Harvey’s wife Daeida Wilcox. .. made in Hollywood was The Count of Monte Cristo in 1908, followed by Old California in 1910. In the following decade, the first movie studio appeared on Sunset Boulevard, followed by many others who relocated from the East Coast.

..which has become a major tourist attraction, was originally an electric billboard for Hollywood Hills, and originally spelt out “HOLLYWOODLAND” when it was erected in 1923 by real estate developer Harry Chandler. The sign has seen many updates and restorations and is featured in movies.

.. of Hollywood began with the silent movie era, with comedies such as Charlie Chaplin’s The Kid and D.W. Griffith’s The Birth Of A Nation. The ‘Big Five’ movie studios dominated this era: Warner Brothers, RKO, Fox, MGM and Paramount. Movies with sound ushered in great recognition, affluence and fame for Hollywood, with its riveting fare of westerns, musicals, horror, and romantic dramas.

Movie stars began to be idolized, and movie studios took the current political climate and churned out movies with themes of war and patriotism(in World War I)

..saw the greatest movies in Hollywood history being made, like Snow White and the Seven Dwarves, Mr Smith Goes to Washington, Jezebel, A Star Is Born, Citizen Kane, Gone with the Wind, and many others.

.. lead to more people being anxious with the news headlines and needing a dose of humour, and at the same time, educate them about the realities of war. Great comedians like Bud Abbott, Lou Costello, Bob Hope and Jack Benny captured the imagination of movie-goers.

Many movie stars including Clark Gable and Henry Fonda enlisted in the armed forces, and many actresses like Rita Hayworth and Betty Grable motivated soldiers with their sex-appeal.

A Supreme Court ruling in 1948 prohibiting movie studios to own theatres showing only their movies. The movie studios were also bound by a voluntary set of censorship rules called the Hays Code, which held them back as the audience grew liberal in the 60s. The same decade saw the explosion of Television, marking a slowdown in movie attendance.

In 1947, The House Un-American Activities Committee(HUAC) started investigating communist ties in Hollywood, making many come to testify. Many directors and screenwriters(called The Hollywood Ten) protested but were jailed and fined as they were held in contempt of Congress. This entire fiasco created a scuffle in the industry with hundreds of actors, musicians, writers, producers and directors being denied work if they were thought to be supporting communism.

The Dark Side Of Hollywood

The stress of fame and wild expectations(always being in conflict with reality) made drug and alcohol usage rampant in Hollywood. This led to the deaths of high-profile celebrities like Marilyn Monroe, Judy Garland, Whitney Houston, and Heath Ledger, to name a few.

For most of Hollywoods history, the ‘casting couch’ may be a hard reality, with rampant sexual abuse being ‘mainstream’. In 2017, Harvey Weinstein, a movie studio mogul, was charged with multiple accusations from employees and actors (called “MeToo”) leading to his downfall, empowering other victims to come forward and breaking the silence.

The 60s and the 70s saw the ‘Second Golden Age’ of Hollywood, with directors like Martin Scorsese, Stanley Kubrick, and Francis Ford Coppola unleashing their creativity and vision.

Some groundbreaking cinema to experience at that time was Bonnie And Clyde, The Graduate, The Godfather, and 2001: A Space Odyssey.

The late 70s and the 80s saw computer graphics reign in Hollywood, with blockbuster action movies (Indiana Jones Series, Jaws, Star Wars) put audiences in theatres, even as the 90s saw movie ticket sales declining due to the VCR. Hollywood pushed in for other revenue streams like video rentals, and later DVDs

.. is a multi-billion dollar industry with epic-budget movies and massive mainstream content from big studios like Disney, and is on the cutting edge of technology.

Due to economic inequality, many Americans are wary of movie stars and their glamorous lifestyle at this age, while social media plays a crucial role in their perception among the public.