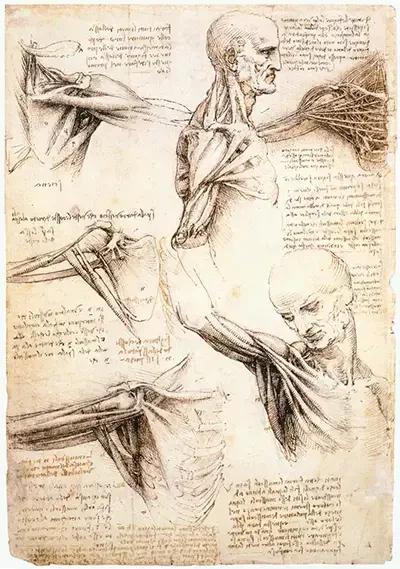 Da Vinci is often described as being a true Renaissance polymath: that is, a person who wishes to understand all branches of knowledge.

His scientific method consisted of a mix of observation of the world around him and the physical experimentation with, and construction of, new inventions, aided by preliminary sketches.

A lack of a formal structure to his education is precisely what enabled Da Vinci to be such a free thinker and such a good scientist. Da Vinci's scientific interests, inventions and experiments spread out vastly into numerous different areas of science. Not only was he interested in chemistry and geology but also in astronomy, pyrotechnics, biology (or zoology), human and animal anatomy and mechanical engineering.

Da Vinci's scientific endeavours were so ahead of his time that he has anticipated many devices that we consider to be 'modern'.

Da Vinci made many detailed drawings of both human and animal anatomy. His famous drawing of the Vitruvian Man is an example of his interest in the proportions of the human body. This drawingis a good example of how several of Da Vinci's scientific works could also be considered works of art.

There is no doubt that Da Vinci's in depth knowledge of the human anatomy beneath the skin enabled him to create such dynamic and realistic portraits of human beings in his paintings.

Da Vinci traced his interest in geology back to a powerful childhood memory that he had of entering a cave near where he was living and seeing, by torchlight, bands of different fossils in the rock. This suggested to him that at one time the cave - which was high up in the Apennine Mountains - was once below sea level.

Leonardo studied the way in which sedimentary rock was formed and this led him to dismiss the notion that it was Noah's Great Flood that caused the sea shells to be thrown up into the mountains.

As a young man, Da Vinci used to construct numerous different objects thanks to an uncle who taught him how. Da Vinci thus made a very good self taught civil engineer. He constructed several inventions that were deemed to be very useful by the state of the time, including bridges and several catapults. One significant aspect of his studies in civil engineering involved hydrodynamics.

Da Vinci created several machines that were designed to control the flow of water, including a corkscrew-shaped contraption that was able to move water in a vertically upward direction.

From his perpetual motion machine to his theories about the relationship between light and opaque bodies, Da Vinci's scientific discoveries are all totally fascinating.

He used his geometrical investigations to understand more about perspective (and subsequently applied this knowledge in his works of art), for instance, whilst his love of flowers and plants led him to study and sketch the makeup of trees and flowers with as much skill and dedication as he devoted to the inner workings of the human body.

The Sketchbooks Of Da Vinci

There is a difference between patience & procrastination.

Out of the mouth of a master, so what did Leonardo da Vinci have to say.

Out of the mouth of a master, so what did Leonardo da Vinci have to say.