Schrödinger And The Conscious Universe - Deepstash
Explore
Get Pro
For Teams

Schrödinger And The Conscious Universe

Schrödinger And The Conscious Universe

In February 1943, Erwin Schrödinger, quantum physicist and Nobel laureate (sharing his prize with Paul Dirac and Werner Heisenberg), gave a series of lectures at Trinity College Dublin, which later turned into his book “What is life? ” This work has been highly influential for a generation of molecular biologists such as Francis Crick, one of the discoverers of DNA.

Less known perhaps is the fact that during his whole life Schrödinger was an ardent reader of philosophy from the East and West. From the 1950s on, when Schrödinger ceased to activelywork on the physics of his time, he focused more on wider philosophical and ethical issues related to science. Back then, his conferences always ended with what he jokingly called the “second Schrödinger equation”: “Atman = Brahman”, the Indian doctrine of identity .

In 1925, just a few months before Schrödinger discovered the most basic equation of quantum mechanics, he wrote down the first sketches of the ideas that he would later develop more thoroughly in “Mind and Matter”. Already then, his thoughts on technical matters were inspired by what he took to be greater metaphysical (religious) questions. Early on, Schrödinger expressed the conviction that metaphysics does not come after physics, but inevitably precedes it. Metaphysics is not a deductive affair but a speculative one.

One such speculative assumption (which can neither be proven nor disproven) is the one that there exists an external (mind-independent) world. Another one is the assumption that there exist separate minds. For both claims, we cannot get any empirical evidence: how could we step out of our own experience to check them? But both create insurmountable problems. The first creates the problem of how to think about the relation between these two types of realities (mind-matter). Why does it appear (according to our best science) that we live in a purely physical world devoid of qualities?

The second speculative assumption creates the problem of how to think about the relation between different minds (mind-mind). Why and how are we different from each other? Schrödinger believed that there is an elegant way to dissolve both of these problems by starting with an alternative metaphysical assumption. He did not endorse traditional Western views that go under the names of reductive materialism and subjective idealism, but he found inspiration in non-Western, particularly Indian philosophies.

The “second Schrödinger equation” refers to an old staple of Indian philosophy according to which the self (“Atman”) is identical to the ultimate reality of the universe (“Brahman”), which forms a central part of the teachings of the Advaita Vedânta. Schrödinger was quick to add that this “self” must not be conflated with the individual self but rather refers to a cosmic, universal entity of which individual selves are mere aspects.

The Spectrum Metaphor Of The One Mind

A metaphor that Schrödinger liked to invoke to illustrate this idea is the one of a crystal that creates a multitude of colors (individual selves) by refracting light (the cosmic self that is equal to the essence of the universe). We are all but aspects of one single mind that forms the essence of reality. He also referred to this as the doctrine of identity. Accordingly, a non-dual form of consciousness, which must not be conflated with any of its single aspects, grounds the refutation of the (merely apparent) distinction into separate selves that inhabit a single world.

There Aren’t Separate Selves That Inhabit A Single World

Schrödinger drew remarkable consequences from this. For example, he believed that any man is the same as any other man that lived before him. In his early essay “Seek for the Road”, he writes about looking into the mountains before him. Thousands of years ago, other men similarly enjoyed this view. But why should one assume that oneself is distinct from these previous men? Is there any scientific fact that could distinguish your experience from another man’s? What makes you you and not someone else?

There Really Is One Mind

Similarly, as John Wheeler once assumed that there is really only one electron in the universe, Schrödinger assumed that there really is only one mind. Schrödinger thought this is supported by “the empirical fact that consciousness is never experienced in the plural, only in the singular. Not only has none of us ever experienced more than one consciousness, but there is also no trace of circumstantial evidence of this ever happening anywhere in the world.”

There Only *Seems* To Be A Multiplicity Of Minds. Why?

In the contemporary scientific study of consciousness, many scholars try to circumvent the question of how and why matter gives rise to conscious experience by asking why there seems to be a hard problem in the first place (when there is in fact none): consciousness is an illusionary story that some physical systems equipped with brains tell themselves. While Schrödinger was far from accepting an illusionary stance about the reality of consciousness, in a very similar vein he asks why it seems as if there were a multiplicity of minds, where there is just one mind (the “Atman=Brahman”).

We Only *Seem* To Be Fundamentally Isolated. Why?

The existence of many separate minds is an illusionary story that confused individuals would tell themselves. Thinking otherwise leads to the false belief that we are in some sense fundamentally isolated, rather than realizing that we are always connected with other beings (and ultimately also with what we now call non-living matter). Unlike in the hard problem case, there is no empirical evidence to suggest our initial belief is real.

Adopt Metaphysics While Keeping With The Scientific Method

An important characteristic of the way Schrödinger approached metaphysical and philosophical teachings was his prudence to uphold a rational and scientific methodology. The “doctrine of identity” cannot be adopted uncritically. We need to incorporate the doctrine into our best science, not throw our best science overboard. In other words, we should adopt a new metaphysics but keep with the scientific method. 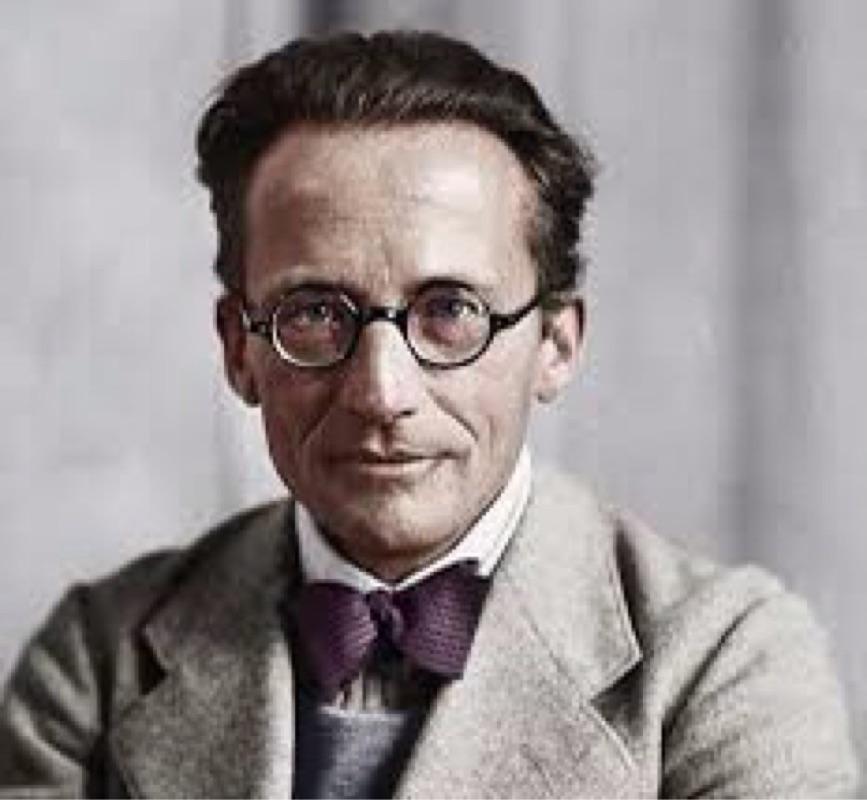 Our scientific theories need “a bit of blood transfusion from Eastern thought … [but] transfusions always need great precaution to prevent clotting. We do not wish to lose the logical precision that our scientific thought has reached, and that is unparalleled anywhere at any epoch.”

What Schrödinger sought, what he would have appreciated the most, is a scientific approach to studying consciousness with mathematical precision. An important constraint following from the doctrine of identity for any such theory of consciousness would be that it, in its very basic structure, acknowledges that individual conscious beings are (i) aspects of a higher, unifying agent (rather than being disconnected individuals), and (ii) that the entire collection of such beings constitutes the ultimate nature of reality (rather than being just one among many things-electrons, rocks, or brains.)

The Theory Of Conscious Agents

The Physical World And The One-Self World

The theory also seems to be compatible with the idea that the entire collection of agents constitutes the nature of reality, though this requires the theory to come up with a model of how the physical world can arise (and be nothing apart) from this collection.

How could this be so? Schrödinger relied on a couple of arguments that have been raised previously in philosophy (e.g. by Kant) but his position boils down to this: what we call the physical world is the result of a process that Schrödinger called “objectivation”, i.e. the transformation of the one self-world (Atman=Brahman).

Objectivation’s result is something that can be readily conceptualized and objectively studied, hence something that is fully void of subjective qualities. In the theory of conscious agents this amounts to the creation of “interfaces”. Such interfaces simplify what is going on in order to allow you to act efficiently. Good interfaces hide complexity. They do not let you see reality as it is but only as it is useful to you. What you call the “physical world” is merely a highly-simplified representation of non-dual consciousness.

The False Impression Of An Autonomous “Physical World”

This physical world also appears to harbor a multitude of subjects directed at it. It is the very same process of objectivation, which led to the false impression of an autonomous physical world, that also leads to the fallacy of assuming different forms of consciousness inhabiting different bodies. The quick fix of adding mental properties to a non-mental world would not be able to really solve the problems mentioned earlier. Do we need to label them with a tag saying “individual x”? But then, why are you you and not someone else? How to combine one set of subjects into a higher one?

The Idea Of Separate Selves Is (A Useful) Fiction

But those problems can be circumvented by never giving in to the metaphysical assumption of the existence of one physical world that is opposed to many separated selves in the first place. According to the theory of conscious agents, the idea of fundamentally separated selves is a useful fiction that arises only if we conflate what we see on the interface with the true reality of non-dual consciousness.

The theory of conscious agents proposes an interesting answer to Schrödinger’s questions. Why does it appear that we are living in a physical world without qualities? Why and how are we different from each other? Because the dynamics of conscious agents results in the creation of interfaces that hide the true character of reality. We are the same, yet we can appear as different.

From one perspective all agents combine into a single one which equals a (single) world. From a different perspective, this single agent is equal to a network of distinct agents that all inhabit their own worlds.

Which perspective we choose, depends on what we want to explain.

Although I think that life may be the result of an accident, I do not think that of consciousness.

“The total number of minds in the universe is one.” — Erwin Schrödinger