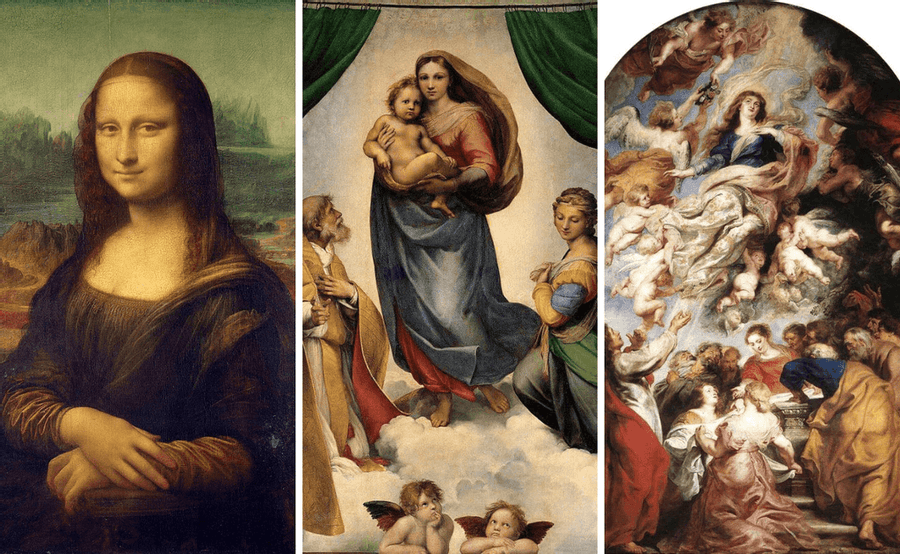 The period from the 14th century to the 17th century in Europe is popularly called Renaissance, and it marked a rebirth or revival of classical learning and wisdom.

The wave of renaissance touched upon many areas of European civilization, particularly the areas of art, religion, literature, and politics.

Renaissance marked an increased awareness of nature, a revival in learning which was all present in the medieval period but became prominent in the 15th and 16th century. Renaissance art was all about the representation of an individual view of a man.

10 Most Famous Paintings of The Renaissance

This painting is one of the most famous and recognized paintings in history. There have been many discussions on the enigmatic smiles of the Mona Lisa, on whether she is really smiling or not.

The major feature of this painting is that even when you change the angle of the view, the eyes of the Mona Lisa seems to always follow you. The painting is done in oil on wood and is presently under the ownership of the Government of France.

Primavera means spring in Italian. This painting is also known as the 'Allegory of Spring'.

It is one of the prime examples of Renaissance art. There are various interpretations of this painting. Some say it is a mythical allegory while some say it is about the change of season into spring. This painting is popular because of the use of colour and the different explanations attached to it. Primavera is believed to be the most controversial painting in the world.

3. The Creation of Adam

The creation of Adam is the painting on the ceiling of the Sistine Chapel. Even though this is one of the most replicated paintings of all time, it is only second in popularity to Mona Lisa. The painting has become a symbol of humanity as the image depicts the hand of both God and Adam on the verge of touching.

The image shows Jesus with his disciples for his last supper. The painting is noted for its clever use of colour, light, and anatomy. The painting is also a subject of many discussions and conjectures. Many have proposed that the disciple sitting to the right of Jesus is Mary Magdalene and many have also wondered the significance or meaning of the V shape between Jesus and the person on the right.

5. The School of Athens

This painting stands one among the four main frescos on the walls of the Apostolic Palace in the Vatican. The four frescos symbolize Philosophy, Poetry, Theology, and Law.

This painting symbolizes philosophy and is a representation of the finest period of Greek Philosophy as one can find Aristotle and Plato in the centre of the painting.

This painting has perfectly captured the classical spirit of the Renaissance.

6. The Kiss of Judas

Located in: The Scrovegni Chapel

This painting depicts the moment of betrayal of Jesus by Judas Iscariot who identifies Jesus to the Roman soldiers by kissing him.

Many critics believe that Giotto is a genius and no artist has been able to surpass his work. His mastery is evident in the way he captured the expression of Jesus and Judas at that scene of betrayal.

The painting is about the second coming of Jesus, the day when God shall judge all humanity. Jesus is painted in the center surrounded by saints. The top portion of the painting shows the resurrection of the dead to heaven and the bottom portion shows the descent of sinners into hell.

The painting shows Mother Mary holding baby Jesus in her hands with Saint Barbara and Saint Sixtus on both her sides and two cherubs beneath her.

This is one of the most famous works of Raphael and an important painting of the Renaissance.

9. Assumption of the Virgin

This painting was done by the artist in his early years and he has used vivid colors in this painting. Assumption of the Virgin is a painting about the rise of Mother Mary into heaven. Mother Mary is painted in a red dress who is raised to heaven to where God is gazing down in Mary while apostles bid her farewell from the ground.

The painting shows Goddess Venus arriving on the island of Cyprus. She is depicted as a pure and mature woman standing on a seashell. Botticelli had given much attention to every detail of Venus. This painting was done in a period where nudity was a subject in paintings and thus makes this one an important painting of the Renaissance.

3 Brilliant Polymaths, and the Advice They Left Behind

A Beginner’s Guide to Art History