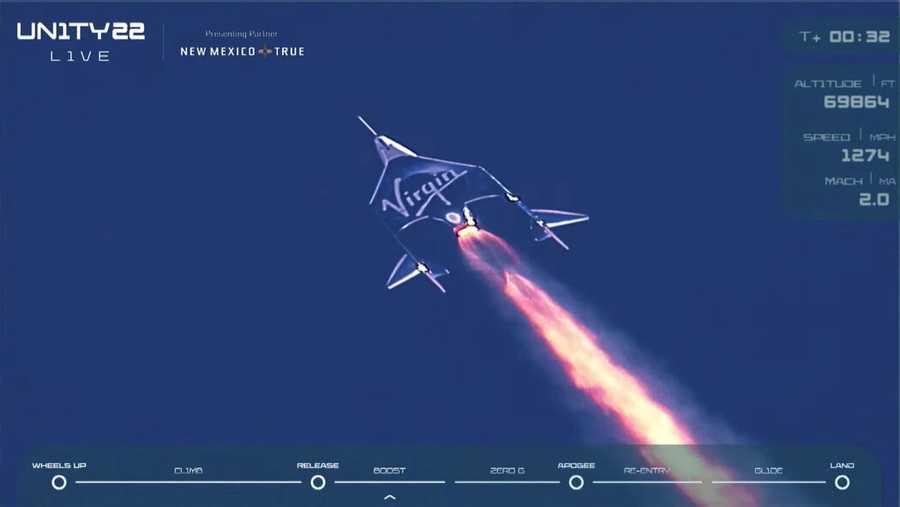 The space plane separated from the carrier ship around 11:25 a.m. and ignited its engine for about 60 seconds, carrying Mr. Branson and the crew into space. Video footage from the live stream showed him and the crew experiencing weightlessness.

A seat on one of the company’s spaceships originally cost $200,000 . The company later raised the price to $250,000 . It then stopped sales after a crash during a test flight in 2014. When the company resumes sales later this year, the price will probably rise again, said Michael Colglazier, Virgin Galactic’s chief executive.

An unnamed passenger paid $28 million to join the Amazon founder Jeff Bezos later this month when his rocket company, Blue Origin, is to launch its New Shepard rocket and capsule. The company has yet to announce the standard fare for a trip on its spacecraft when Mr. Bezos isn’t in the next seat.

Three people paid $55 million each to Axiom Space in Houston to fly in SpaceX’s Crew Dragon to the International Space Station as soon as early next year.

But not all trajectories to space will involve six or seven figures. On Sunday, Mr. Branson announced that Virgin Galactic would give away two tickets to space as part of a sweepstakes initiative with the charitable fund-raising platform Omaze.

The Virgin Galactic design already has an imperfect safety record. The company’s first space plane, the V.S.S. Enterprise, crashed during a test flight in 2014 when the co-pilot moved a lever too early during the flight, allowing the tail booms to rotate when they should have remained rigid. The Enterprise broke apart, and the co-pilot, Michael Alsbury, was killed. The pilot, Peter Siebold, survived after parachuting out of the plane.

The controls were redesigned so that the tail booms cannot be unlocked prematurely.

The Italian Air Force has purchased seats on future flights for scientific research, as has the Southwest Research Institute in Boulder, Colo. It will be much easier, faster and cheaper to fly experiments on suborbital flights than to get them to the International Space Station.