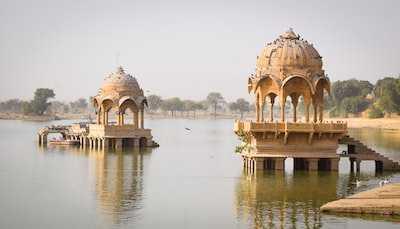 Jaisalmer - the Golden city of India

Situated in the Indian State of Rajasthan , The town stands on a ridge of yellowish sandstone and is crowned by the ancient Jaisalmer Fort. This fort contains a royal palace and several ornate Jain temples. The town lies in the heart of the Thar Desert (the Great Indian Desert)

There are seven Jain temples in total which are situated within the Jaisalmer fort built during the 12th and 15th centuries. Among these temples, the biggest is the Paraswanath Temple; the others are Chandraprabhu temple, Rishabdev temple,Shitalnath Temple, Kunthunath Temple and Shantinath Temple. Known for their exquisite work of art and architecture that was predominant in the medieval era the temples are built out of yellow sandstone and have intricate engravings on them.

Jaisalmer has some of the oldest libraries of India containing rarest of the manuscripts and artefacts of Jain tradition.

The Desert Festival of Jaisalmer

Desert Festival of Jaisalmer is the most awaited and famous cultural and colourful event of Rajasthan. Camel races, Turban-tying and Mr. Desert competitions are organised. It is held in the month of February every year. The festival showcases Rajasthani folk songs and dance and it is very attractive to foreign tourists. Gair and Fire dancers which are the major attraction of the Jaisalmer desert festival celebrations. This is the best time to visit Jaisalmer to witness performing arts like Kalbelia dances and folk songs and music.