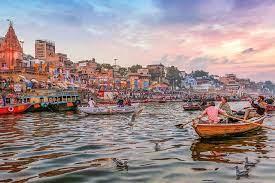 Varanasi , also known as Benares, is a city on the banks of the river Ganges in Uttar Pradesh , India. A major religious hub in India, it is the holiest of the seven sacred cities (Sapta Puri) in Hinduism and Jainism, and played an important role in the development of Buddhism and Ravidassia.

The economic importance of Varanasi

According to Hindu mythology, Varanasi was founded by Shiva,one of three principal deities along with Brahma and Vishnu. During a fight between Brahma and Shiva, one of Brahma's five heads was torn off by Shiva. As was the custom, the victor carried the slain adversary's head in his hand and let it hang down from his hand as an act of ignominy, and a sign of his own bravery. Shiva thus dishonored Brahma's head, and kept it with him at all times. When he came to the city of Varanasi in this state, the hanging head of Brahma dropped from Shiva's hand and disappeared in the ground at varanasi.