The 1945 United Kingdom general election was a national election held on 5 July 1945, but polling in some constituencies was delayed by some days, and the counting of votes was delayed until 26 July to provide time for overseas votes to be brought to Britain. The governing Conservative Party sought to maintain its position in Parliament but faced challenges from public opinion about the future of the United Kingdom in the post-war period. British Prime Minister Winston Churchill proposed to call for a general election in Parliament, which passed with a majority vote less than two months after

The election's campaigning was focused on leadership of the country and its future. Churchill sought to use his wartime popularity as part of his campaign to keep the Conservatives in power after a wartime coalition had been in place since 1940 with the other political parties, but he faced questions from public opinion surrounding the Conservatives' actions in the 1930s and his ability to handle domestic issues unrelated to warfare. Clement Attlee , who led the Labour Party , was seen as a more competent leader by voters, particularly those who feared a return to the levels of unemployment

The final result of the election showed Labour to have won a landslide victory,[2] making a net gain of 239 seats and winning 47.7%, thus allowing Attlee to be appointed prime minister. This election marked the first time that the Labour Party had won an outright majority in parliament, and allowed Attlee to begin implementing the party's post-war reforms for the country.[3] For the Conservatives, the Labour victory was a shock,[4] as they suffered a net loss of 189 seats although they won 36.2% of the vote and had campaigned on the mistaken belief that Churchill would win as people praised

The 10.7% swing from the Conservatives to an opposition party is the largest since the Acts of Union 1800 ; the Conservative loss of the vote exceeded that of the 1906 Liberal landslide ousting of a Conservative administration. Churchill remained actively involved in politics and returned as prime minister after leading his party into the 1951 general election . For the National Liberals, the election was their last as a distinct party, as they merged with the Conservatives in 1947 while Ernest Brown resigned from politics in the aftermath of the election.

Dissolution of Parliament and campaign

Held less than two months after VE Day , it was the first general election since 1935 , as general elections had been suspended during the Second World War . Clement Attlee , the leader of the Labour Party , refused Winston Churchill 's offer of continuing the wartime coalition until the Allied defeat of Japan . On 15 June, King George VI dissolved Parliament, which had been sitting for ten years without an election.

The polls for some seats were delayed until 12 July and in Nelson and Colne until 19 July because of local wakes weeks .[8] The results were counted and declared on 26 July to allow time to transport the votes of those serving overseas. Victory over Japan Day ensued on 15 August. 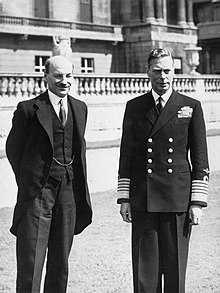 "Everywhere I went in London people admired [Churchill's] energy, his courage, his singleness of purpose. People said they didn't know what Britain would do without him. He was obviously respected. But no one felt he would be Prime Minister after the war. He was simply the right man in the right job at the right time. The time being the time of a desperate war with Britain's enemies".[10]

The historian Henry Pelling , noting that polls showed a steady Labour lead after 1942, pointed to long-term forces that caused the Labour landslide:

The greatest factor in Labour's dramatic win appeared to be its policy of social reform . In one opinion poll, 41% of respondents considered housing to be the most important issue that faced the country, 15% stated the Labour policy of full employment, 7% mentioned social security, 6% nationalisation, and just 5% international security, which was emphasised by the Conservatives.

Though voters respected and liked Churchill's wartime record, they were more distrustful of the Conservative Party's domestic and foreign policy record in the late 1930s.[5] Churchill and the Conservatives are also generally considered to have run a poor campaign in comparison to Labour. As Churchill's personal popularity remained high, the Conservatives were confident of victory and based much of their election campaign on that, rather than proposing new programmes. However, people distinguished between Churchill and his party,

I share what I found in Internet and what I knew