The Prize Money - Deepstash
Explore
Get Pro
For Teams 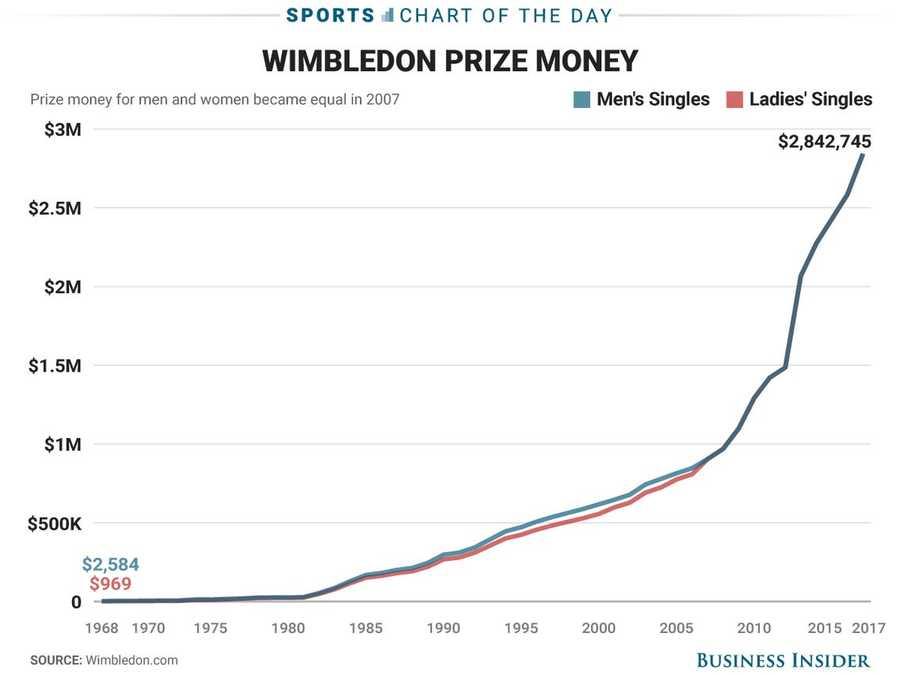 No one officially "won" anything for competing up until 1968. During the early years of the Wimbledon, many of the competitors would pay money out of their own pocket just for the opportunity to be able to compete.

The Championships and The War

Due to the first world war, the Championships were suspended from 1915-19 but the All England Club survived due to donations from members and wealthy benefactors.

By the time that the hostilities continued in 1939, the Wimbledon was already moved from Worple Rd to Church Rd becoming ever more resilient to a point.

However, on October 11th 1940, a 500lb bomb caused great damage to the club's ground. The championships were suspended but the grounds were being used for a variety of war-related purposes back then.

The early beginnings of the Wimbledon

the very first Wimbledon championship happened on July 9, 1877 at 3:30 in the afternoon. It took place in beside London and Worple road, Wimbledon.

There were twenty-two men who each paid a guinea just to be able to compete.

Over time, the Wimbledon championships evolved and finally let women participate with their own competition in 1884

From Worple Rd to Church Rd

Before the first world war insinuated, the Wimbledon club realized the inadequacy of their current capacity at the Worple Road. They then decided to transfer to Church Road, to the north of Wimbledon Town Center in 1922.

This move was a huge gamble that cost them £140k but the great news is that moving to another area is most likely never going to happen again.

The Max Factor and the Matthews Final

In 1921, Max Woosnam won the Men's Doubles with Randolph Lycett. Max was greatly known for his exploits with balls of a slightly larger nature where he played centre-half for Chelsea and Manchester City and he also earned a solitary Enland cap in 1922.

In 1961, Stanley Matthews won the Junior Wimbledon. This was not the famous Englash footballer, but rather his son that had the same name as him who defeated Alexander Metreveli in the final.

The origin of tennis

The origin of tennis was believed to have come from Northern France around the 12th century, the game was called jeu de paume, which was initially played using the palms of our hands and the use of rackets were added around the 16th century.

In 1947, Hans Redl of Austria progressed to the fourth round of the Men's Singles event at the Wimbledon. The catch however is that Redl had only his right arm with him to compete.

He had lost his left arm while on active service. He, however, was granted a special dispensation during the competition. He was allowed to touch the ball twice every time he served.

Redl went on to compete at Wimbledon until 1956.

The Saint and The Sinner

Reverend John Thorneycroft was the third man to ever win the Wimbledon Men's Singles. He was a devout and religious man who wasn't expecting to reach the latter stages of the Wimbledon.

He left the tournament to fulfill his religious duties and came back to to finish the tournament and eventually won against the Irishman Vere Thomas St. Leger Goold.

This Irishman, after losing mutliple times to the Reverend, was found guilty of killing a wealthy Danish woman.