Expelled from the Royal Exchange, brokers congregated in Change... - Deepstash 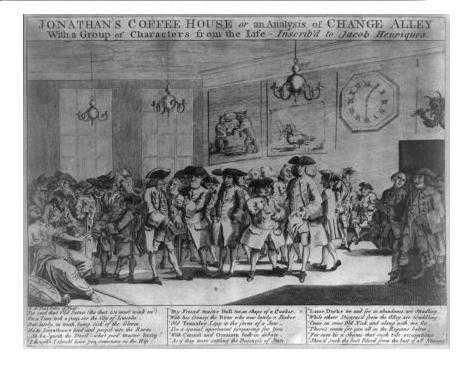 Expelled from the Royal Exchange, brokers congregated in Change Alley between Cornhill and Lombard streets in the City of London. In 1700, when the city government prohibited them from meeting on the street, their main trading venue became Jonathan’s Coffee House.

A market flourished where traders engaged in surprisingly complex contracts including forwards and options. Interestingly, none of the agreements were enforceable in official courts of law. Yet people engaged in them nonetheless.

A notable moment in world economic history was the creation of the joint stock company. It started in Amsterdam with the foundation of the Dutch East India Company and then in England.

By the end of the 17th century, shares of at least 150 corporations were traded at London's Royal Exchang...

A more widespread adoption of the Kleros Token Curated Registry can be an excellent first step for the regulation of the emerging DeFi ecosystem. A method that is native to the internet age and more sophisticated than the “coffee shop regulation” which is currently provided by centralized private...

Public/Private Governance and the Future of Decentralized Finance

The regulation of financial markets has gone a long way since the early days of the gentlemen's clubs in London coffee houses. After starting as a purely private governance endeavor, the regulatory body for today's global financial infrastructure is a multi-stakeholder mechanism which encompasses...

As the DeFi ecosystem grows, a number of situations will require resolution:

The emerging decentralized finance ecosystem (DeFi) seems to share many features with the rise of corporations and stock exchanges in the 17th and 18th centuries.

Back then, the joint stock company was a phenomenal financial innovation, a new way to pool and coordinate human work for the f...

The previous section summarizes how Professor Edward Stringham describes the early days of the London Stock Exchange in his book “Private Governance: Creating Order in Social and Economic Life”.

Some of our most respectable financial institutions were born in coffee houses such as insurance firm Lloyd’s of London (formerly, Lloyd’s Coffeehouse), the Philadelphia Stock Exchange (formerly, Merchants Coffee House) and auction house Sotheby’s.

It took more than a century for the Englis...

Interesting piece on building a portofolio for 2022.