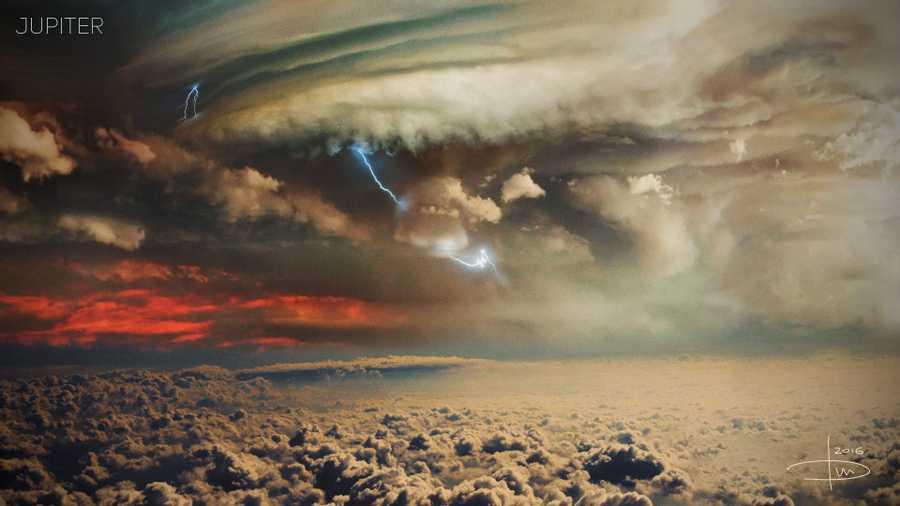 As a gas giant, Jupiter doesn't have a true surface. The planet is mostly swirling gases and liquids. While a spacecraft would have nowhere to land on Jupiter, it wouldn’t be able to fly through unscathed either.

Discoverd in 1979 by NASA's Voyager 1 spacecraft, Jupiter's rings were a surprise, as they are composed of small, dark particles and are difficult to see except when backlit by the Sun. Data from the Galileo spacecraft indicate that Jupiter's ring system may be formed by dust kicked up as interplanetary meteoroids smash into the giant planet's small innermost moons.

Jupiter's appearance is tapestry of colorful cloud bands and spots. The gas planet likely has three distinct cloud layers in its "skies" that, taken together, span about 44 miles (71 kilometers). The top cloud is probably made of ammonia ice, while the middle layer is likely made of ammonium hydrosulfide crystals. The innermost layer may be made of water ice and vapor.

The vivid colors you see in thick bands across Jupiter may be plumes of sulfur and phosphorus-containing gases rising from the planet's warmer interior. Jupiter's fast rotation—spinning once every 10 hours—creates strong jet streams, separating its clouds into dark belts and bright zones across long stretches.

With no solid surface to slow them down, Jupiter's spots can persist for many years. Stormy Jupiter is swept by over a dozen prevailing winds, some reaching up to 335 miles per hour (539 kilometers per hour) at the equator. The Great Red Spot, a swirling oval of clouds twice as wide as Earth, has been observed on the giant planet for more than 300 years. More recently, three smaller ovals merged to form the Little Red Spot, about half the size of its larger cousin. Scientists do not yet know if these ovals and planet-circling bands are shallow or deeply rooted to the interior.

The spacecraft, which arrived at Jupiter in July 2016, is the first to study the planet's mysterious, cloud-shrouded interior. Scientists also use the Earth-orbiting Hubble Space Telescope and ground-based telescopes to regularly check in on Jupiter.

Pioneer 10 was the first spacecraft to fly past Jupiter. It was followed by Pioneer 11, Voyager 1 and Voyager 2 flybys. NASA's Galileo mission was first to orbit Jupiter and to send an atmospheric probe into the stormy clouds. The international Ulysses mission used Jupiter's powerful gravity to hurl itself into orbital passes of the Sun's northern and southern poles. Both Cassini and New horizons studied Jupiter as they hurtled on to their main science targets — Saturn for Cassini and Pluto and the Kuiper Belt for New Horizons.

Jupiter holds a unique place in the history of space exploration. In 1610, astronomer Galileo Galilei used a new invention called the telescope to look at Jupiter and discovered the first moons known to exist beyond Earth. The discovery ended incorrect, ancient belief that everything, including the Sun and other planets, orbited the Earth.

The composition of jupiter is similar to that of the Sun - mostly hydrogen and helium. Deep in the atmosphere, pressure and temperature increase, compressing the hydrogen gas into a liquid.

This gives Jupiter the largest ocean in the solar system—an ocean made of hydrogen instead of water. Scientists think that, at depths perhaps halfway to the planet's center, the pressure becomes so great that electrons are squeezed off the hydrogen atoms, making the liquid electrically conducting like metal.

Jupiter's fast rotation is thought to drive electrical currents in this region, generating the planet's powerful magnetic field. It is still unclear if, deeper down, Jupiter has a central core of solid material or if it may be a thick, super-hot and dense soup. It could be up to 90,032 degrees Fahrenheit (50,000 degrees Celsius) down there, made mostly of iron and silicate minerals (similar to quartz).

The jovian magnetoshpere is the region of space influenced by Jupiter's powerful magnetic field. It balloons 600,000 to 2 million miles (1 to 3 million kilometers) toward the Sun (seven to 21 times the diameter or Jupiter itself) and tapers into a tadpole-shaped tail extending more than 600 million miles (1 billion kilometers) behind Jupiter, as far as Saturn's orbit. Jupiter's enormous magnetic field is 16 to 54 times as powerful as that of the Earth. It rotates with the planet and sweeps up particles that have an electric charge. Near the planet, the magnetic field traps swarms of charged particles and accelerates them to very high energies, creating intense radiation that bombards the innermost moons and can damage spacecraft.

Jupiter's magnetic field also causes some of the solar system's most spectacular aurorae at the planet's poles.

Jupiter's environment is probably not conducive to life as we know it. The temperatures, pressures and materials that characterize this planet are most likely too extreme and volatile for organisms to adapt to.

While planet Jupiter is an unlikely place for living things to take hold, the same is not true of some of its many moons. Europa is one of the likeliest places to find life elsewhere in our solar system. There is evidence of a vast ocean just beneath its icy crust, where life could possibly be supported.

Jupiter took shape when the rest of the solar system formed about 4,5 billion years ago, when gravity pulled swirling gas and dust in to become this gas giant.

Jupiter took most of the mass left over after the formation of the Sun, ending up with more than twice the combined material of the other bodies in the solar system. In fact, Jupiter has the same ingredients as a star, but it did not grow massive enough to ignite.

About 4 billion years ago, Jupiter settled into its current position in the outer solar system, where it is the fifth planet from the Sun.

Jupiter has the shortest day in the solar system. One day on Jupiter takes only about 10 hours (the time it takes for Jupiter to rotate or spin around once), and Jupiter makes a complete orbit around the Sun (a year in Jovian time) in about 12 Earth years (4,333 Earth days).

Its equator is tilted with respect to its orbital path around the Sun by just 3 degrees. This means Jupiter spins nearly upright and does not have seasons as extreme as other planets do.

With four large moons and many smallersm moons, Jupiter forms a kind of miniature solar system. Jupiter has 53 confirmed moons and 26 provisional moons awaiting confirmation of discovery. Moons are named after they are confirmed.

Jupiter's four largest moons—Io, Europa, Ganymede and Callisto—were first observed by the astronomer Galileo Galilei in 1610 using an early version of the telescope. These four moons are known today as the Galilean satellites, and they're some of the most fascinating destinations in our solar system. Io is the most volcanically active body in the solar system. Ganymede is the largest moon in the solar system (even bigger than the planet Mercury). Callisto’s very few small craters indicate a small degree of current surface activity. A liquid-water ocean with the ingredients for life may lie beneath the frozen crust of Europa, making it a tempting place to explore.