Challenge to the Standard Model

The particle célèbre is the muon, which is akin to an electron but far heavier, and is an integral element of the cosmos. Dr. Polly and his colleagues — an international team of 200 physicists from seven countries — found that muons did not behave as predicted when shot through an intense magnetic field at Fermilab.

The aberrant behavior poses a firm challenge to the Standard Model, the suite of equations that enumerates the fundamental particles in the universe (17, at last count) and how they interact. 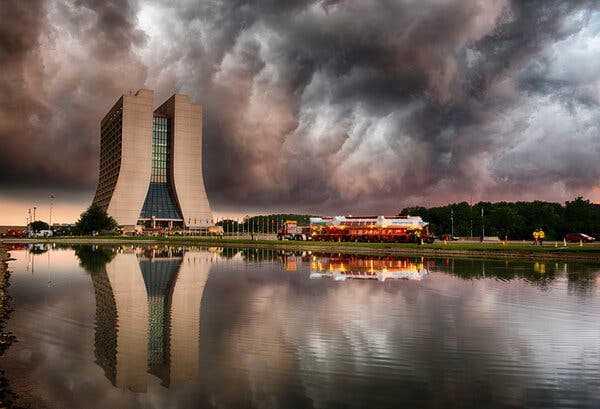 The measurements have about one chance in 40,000 of being a fluke, the scientists reported, well short of the gold standard needed to claim an official discovery by physics standards. Promising signals disappear all the time in science, but more data are on the way. Wednesday’s results represent only 6 percent of the total data the muon experiment is expected to garner in the coming years.

On the path to Dark Matter

It might also lead in time to explanations for the kinds of cosmic mysteries that have long preoccupied our lonely species. What exactly is dark matter , the unseen stuff that astronomers say makes up one-quarter of the universe by mass? Indeed, why is there matter in the universe at all ?

Muons are an unlikely particle to hold center stage in physics. Sometimes called “fat electrons,” they resemble the familiar elementary particles that power our batteries, lights and computers and whiz around the nuclei of atoms; they have a negative electrical charge, and they have a property called spin, which makes them behave like tiny magnets.

But they are 207 times as massive as their better-known cousins. They are also unstable, decaying radioactively into electrons and super-lightweight particles called neutrinos in 2.2 millionths of a second.

Muons owe their current fame to a quirk of quantum mechanics, the nonintuitive rules that underlie the atomic realm. Among other things, quantum theory holds that empty space is not really empty but is in fact boiling with “virtual” particles that flit in and out of existence.

“You might think that it’s possible for a particle to be alone in the world,” Dr. Polly said in a biographical statement posted by Fermilab . “But in fact, it’s not lonely at all. Because of the quantum world, we know every particle is surrounded by an entourage of other particles.”

This entourage influences the behavior of existing particles, including a property of the muon called its magnetic moment, represented in equations by a factor called g. According to a formula derived in 1928 by Paul Dirac, the English theoretical physicist and a founder of quantum theory, the g factor of a lone muon should be 2.

But muons aren’t alone, so the formula must be corrected for the quantum buzz arising from all the other potential particles in the universe. That leads the factor g for the muon to be more than 2, hence the name of the experiment: Muon g-2.

The extent to which g-2 deviates from theoretical predictions is one indication of how much is still unknown about the universe — how many monsters, as Dr. Polly put it, are lurking in the dark for physicists to discover.

Meanwhile, in 2020, a group of 170 experts known as the Muon g-2 Theory Initiative published a new consensus value of the theoretical value of the muon’s magnetic moment , based on three years of workshops and calculations using the Standard Model. That answer reinforced the original discrepancy reported by Brookhaven.

On the day of the Fermilab announcement another group, using a different technique known as a lattice calculation to compute the muon’s magnetic moment, got a different answer than Dr. El-Khadra’s group, adding a new note of uncertainty to the proceedings.

The team had to accommodate another wrinkle. To avoid human bias — and to prevent any fudging — the experimenters engaged in a practice, called blinding, that is common to big experiments. In this case, the master clock that keeps track of the muons’ wobble had been set to a rate unknown to the researchers. The figure was sealed in envelopes that were locked in the offices at Fermilab and the University of Washington in Seattle.