The Evolution of Modern Tennis: Who Invented the Game? - Deepstash
Explore
Get Pro
For Teams

French Monks And The Palm Game

A version of modern tennis, played without racquets (using palms of the hand) by French monks was called jeu de paume, or the Game Of The Palm.

It was upgraded in the year 1500 ADE with wooden racquets, and balls made of leather and cork. The game became extremely popular in England where about 1800 indoor courts came up. 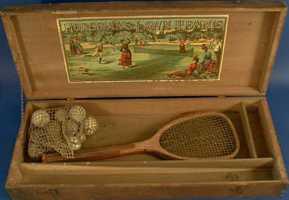 By the 18th century, the rubber ball made the game popular again, as it had the ability to be played outdoors on grass.

A version of the game called Sphairistikè was played in an hourglass-shaped court in London, creating a sensation in the whole of Europe in the year 1873. This later evolved into a rectangular court, with women not allowed until 1884.

The famous scoring technique of Tennis: Love, 15, 30, 40, deuce originated in France. The game was divided into a 60 point system due to its association with medieval numerology. 40 (quarante) was used instead of 45 (quarante cinq) as it was shorter in french.

The term love came from the word l'oeuf which means nothing or an egg (signifying zero).

I get my inspiration from nature and objects around me.