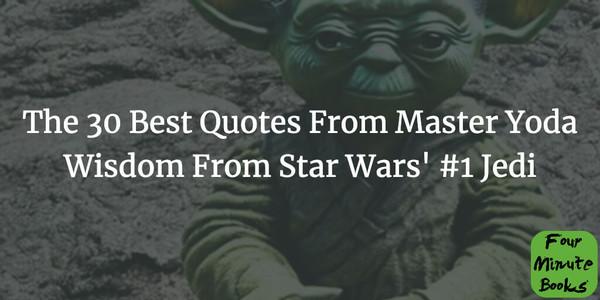 The 30 Best & Most Popular Yoda Quotes 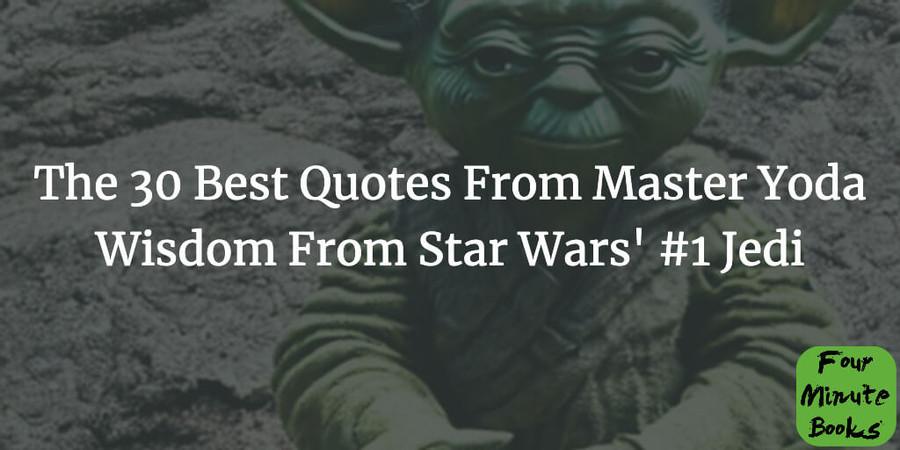 Yoda is one of the strongest, most inspiring, and most beloved characters in Star Wars . He first appeared in the 1980 sequel to the original movie (Episode V — The Empire Strikes Back ) and instantly became a fan favorite. If you’re looking for the best Yoda quotes, you’ve come to the right place! As he said when first encountering Luke Skywalker: “Looking? Found someone you have, eh?”

In this organized list, we’ve compiled the most popular Yoda quotes for you, based on how often we see them online and in pop culture. While there’s a clear #1, there’s no exact data on the others, but in general, our top 10 should hold up pretty well.

We’ve also included Nik’s 20 favorite additional quotes, a little of Yoda’s backstory, and some guidance on why studying his quotes is worthwhile. Finally, we used an AI art generator to create some cool images for you to share your favorite Yoda quotes on social media.

You can easily navigate this list by jumping to any section that interests you using the table of contents below. If you want to share a quote, simply highlight the text, and sharing options for all major social media platforms will appear. Alternatively, you can also use the images we created for you in the last section of this list.

Ready to learn you are, I hope. Here goes our list of the best quotes from Master Yoda!

Since his debut, Yoda has been featured in countless movies, comics, spinoffs, and other aspects of the Star Wars franchise, itself one of the most popular stories in history.

Yoda is a tiny green creature of unknown origin. Despite his somewhat reptilian features, he has a human-like form, resembling a cross between a goblin, human, tortoise, and elf (his ears are pointy). Yoda is over 800 years old when we first meet him. As such, he has been the Grand Master of the Jedi Order—a cult of warrior-monks protecting the galaxy—for a long time.

In Star Wars, Yoda is the best of the good guys. His ability to wield “the Force”—the invisible “life power” the Jedi direct and rely on in their quests—is unparalleled. He’s also an excellent fighter with a lightsaber, the Jedi’s weapon of choice. Finally, Yoda teaches all younglings, young children with Jedi powers, before they transition into 1-on-1 student-master relationships to complete their training.

Throughout the Star Wars movie, he takes more of an advisor role, but we do get to see him fight a good bit as well. One of few survivors of “Order 66,” a mass killing order against all Jedi that led to the rise of the dark Galactic Empire, Yoda first goes into exile to contemplate on his failure to foresee this coup. He later returns to train Luke Skywalker and do his part in restoring the good Republic. When Yoda dies at 900 years old, he becomes part of the Force and thus can still appear to other Jedi in ghost-form.

What Can We Gain From Studying Yoda’s Quotes?

While watching Yoda fight is pretty cool, his biggest strength lies in his wisdom. He is known for talking in a jumbled style and offering riddles more so than straight-up advice, but every single one of his words is carefully chosen and hits hard.

In a way, Yoda is the original self-help guru. He’s the first person everyone turns to when they need advice. The best thing Yoda can offer is perspective shifts. His quotes often flip common notions upside down, showing us we’ve been focused on the wrong aspect of a situation. This is incredibly powerful.

A perspective shift takes your thinking to a higher level. Instead of simply attacking an obstacle with force (pun intended), you might find a way over it, under it, or around it. You may even realize what you thought was a problem isn’t an issue at all or that you can safely ignore it and still stay on the right path.

The 10 Most Popular Quotes From Yoda

If you do a Google Trends analysis , you’ll see that “there is no try” ranks far above other Yoda quotes in search volume. It also outpaces the general search for Yoda quotes, suggesting people are even more likely to remember that one line than who it came from. Therefore, this quote takes the #1 spot.

We did some further analysis, and, based on search interest relative to one another, these are Yoda’s 10 greatest hits: 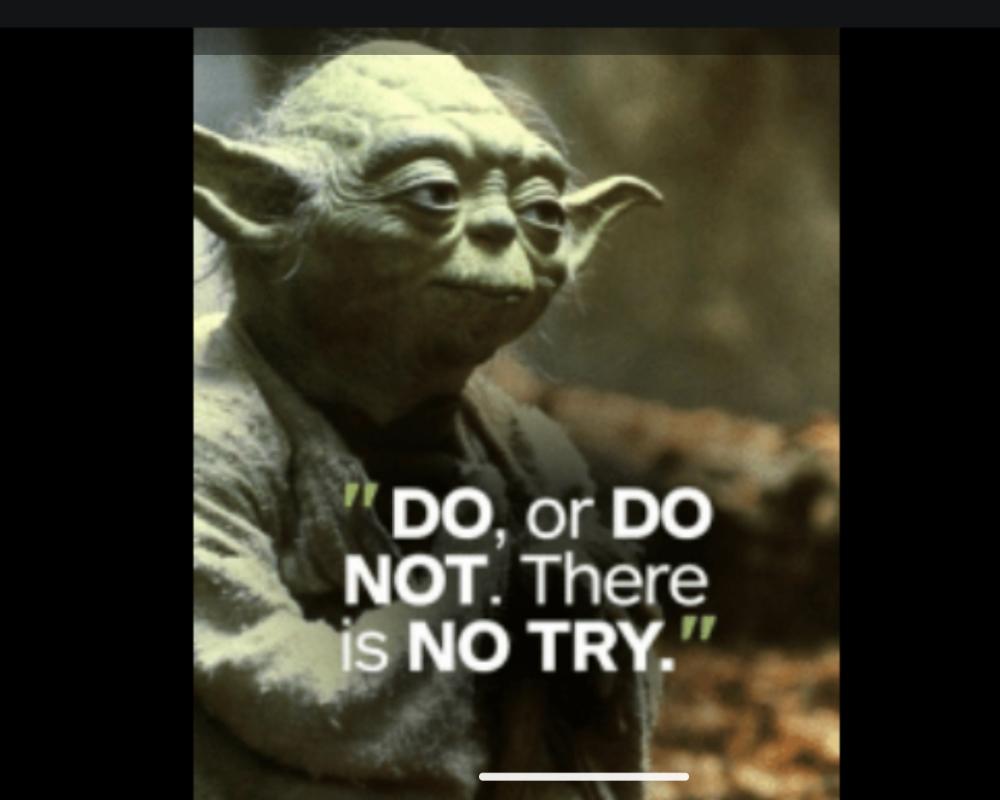 2. “Fear is the path to the dark side. Fear leads to anger. Anger leads to hate. Hate leads to suffering.”

3. “Size matters not. Look at me. Judge me by my size, do you? Hmm? And well you should not. For my ally is the Force, and a powerful ally it is. Life creates it, makes it grow. Its energy surrounds us and binds us. Luminous beings are we, not this crude matter. You must feel the Force around you. Here, between you, me, the tree, the rock—everywhere, yes. Even between the land and the ship.”

4. “Patience you must have, my young Padawan.”

7. “You must unlearn what you have learned.”

8. “A Jedi uses the Force for knowledge and defense, never for attack.”

9. “Pass on what you have learned. Strength, mastery, hmm… but weakness, folly, failure, also. Yes, failure, most of all. The greatest teacher, failure is.”

10. “Death is a natural part of life. Rejoice for those around you who transform into the Force. Mourn them do not. Miss them do not. Attachment leads to jealously. The shadow of greed, that is.”

I have watched every Star Wars movie and most of its related TV shows, many of them twice. I’ve seen Yoda’s scenes many times. Here are the lines from him that most stand out to me and that I go back to time and again:

11. “Train yourself to let go of everything you fear to lose.”

12. “Many of the truths that we cling to depend on our point of view.”

13. “If no mistake have you made, yet losing you are, a different game you should play.”

17. “Once you start down the dark path, forever will it dominate your destiny. Consume you, it will.”

20. “A Jedi must have the deepest commitment, the most serious mind. This one a long time have I watched. All his life has he looked away… to the future, to the horizon. Never his mind on where he was.”

22. “No longer certain, that one ever does win a war, I am. For in fighting the battles, the bloodshed, already lost we have.”

28. “Adventure. Excitement. A Jedi craves not these things.”

29. “To be Jedi is to face the truth, and choose. Give off light, or darkness, Padawan. Be a candle, or the night.”

30. “We are what they grow beyond. That is the true burden of all masters.”

Perhaps you can tell, but Yoda’s wisdom is clearly inspired by Eastern philosophies, like Buddhism and Zen. He reminds me of a Kung Fu master, like Bruce Lee, who mainly uses rigorous physical practice as a way to master the mind and spirit.

From Yoda’s point of view, most problems originate from fear. It’s the #1 thing he warns other Jedi of. “Don’t let fear get the better of you. Once you do, it can transform into all kinds of emotions that’ll drive you to do bad things.” That’s the gist of his message.

Yoda is also big on acceptance, another common theme in Eastern philosophy. Instead of trying to turn reality into some desired future, we should accept it as it is and work with what we’ve got.