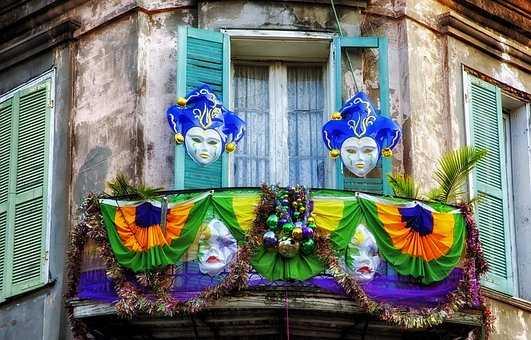 When Christianity arrived in Rome, religious leaders decided to incorporate the pagan celebrations of spring and fertility into the new faith. This was an easier task than to abolish them altogether.

Consequently, the excess and debauchery of Mardi Gras season became a prelude to Lent - the 40 days of fasting and penance between Ash Wednesday and Easter Sunday.

Mardi is the French word for "Tuesday", and gras means "fat." Traditionally, merrymakers would binge on all the rich, fatty foods that remained in their homes before entering Lent.

The word carnival is a common name for the pre-Lenten festivities. In Medieval Latin carnelevarium means to remove meat, from the Latin carnem for meat.

In the following decades, New Orleans and other French settlements began marking the holiday with street parties, masked balls and lavish dinners. The rowdy rituals were banned when the Spanish took control of New Orleans but continued again after Louisiana became a U.S. state in 1812. To this day, Mardi Gras is a legal holiday in Louisiana.

Mardi Gras Around the World

Why Science Fiction Is the Most Important Genre | WIRED