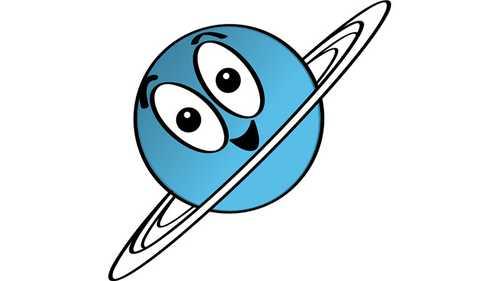 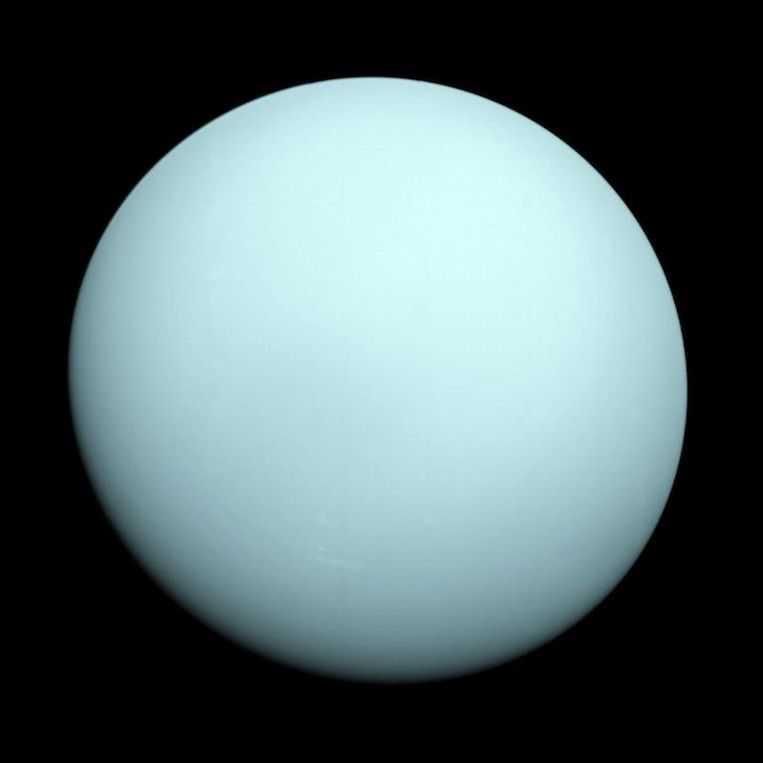 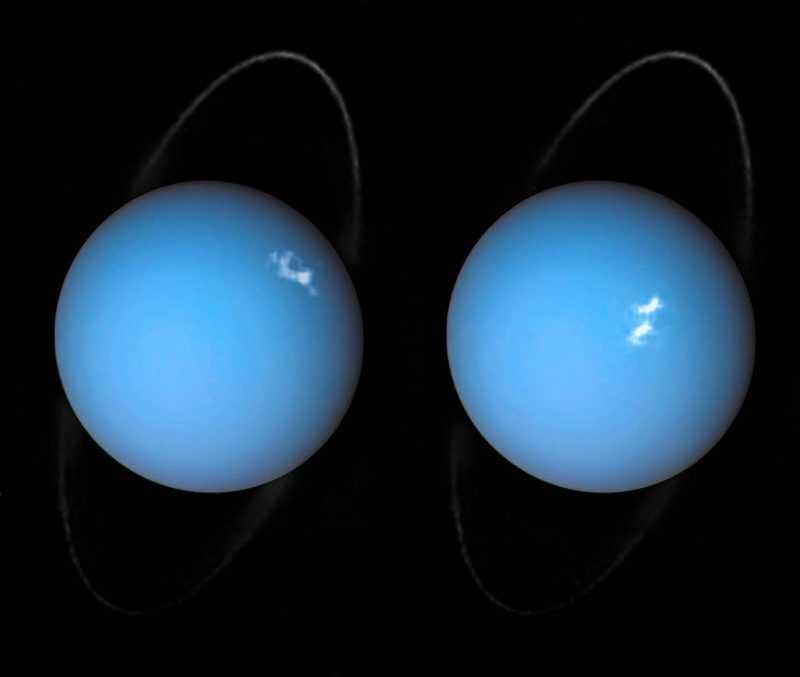 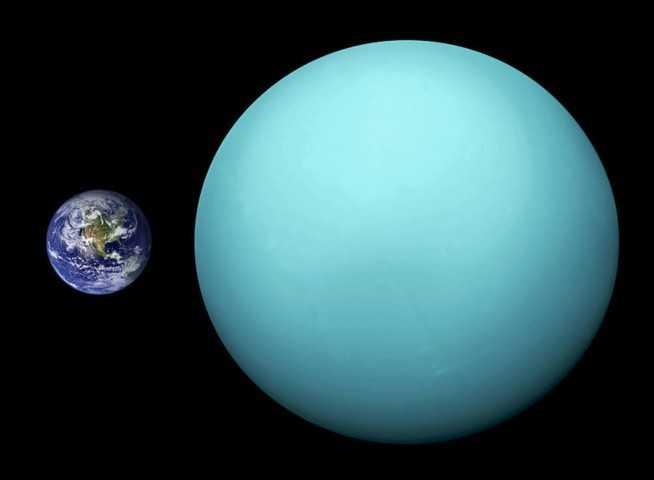 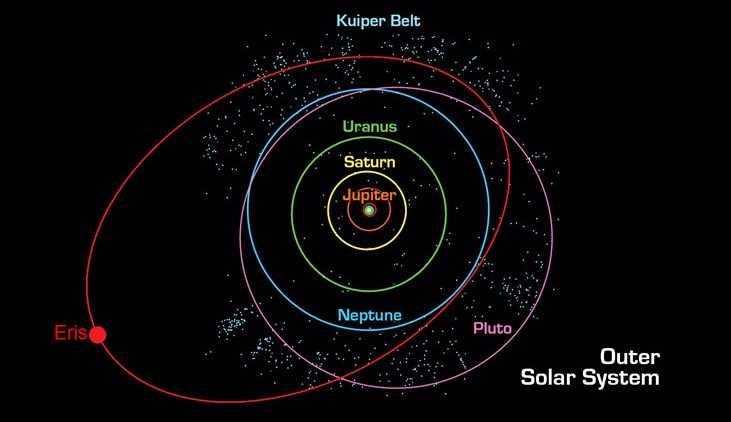 One day on uranus takes about 17 hours (the time it takes for Uranus to rotate or spin once). And Uranus makes a complete orbit around the Sun (a year in Uranian time) in about 84 Earth years (30,687 Earth days).

Uranus is the only planet whose equator is nearly at a right angle to its orbit, with a tilt of 97.77 degrees—possibly the result of a collision with an Earth-sized object long ago. This unique tilt causes the most extreme seasons in the solar system. For nearly a quarter of each Uranian year, the Sun shines directly over each pole, plunging the other half of the planet into a 21-year-long, dark winter.

Uranus is also one of just two planets that rotate in the opposite direction than most of the planets (Venus is the other one), from east to west.

Uranus is one of two ice giants in the outer solar system (the other is Neptune). Most (80 percent or more) of the planet's mass is made up of a hot dense fluid of "icy" materials—water, methane and ammonia—above a small rocky core. Near the core, it heats up to 9,000 degrees Fahrenheit (4,982 degrees Celsius).

Uranus is slightly larger in diameter than its neighbor Neptune, yet smaller in mass. It is the second least dense planet; Saturn is the least dense of all. 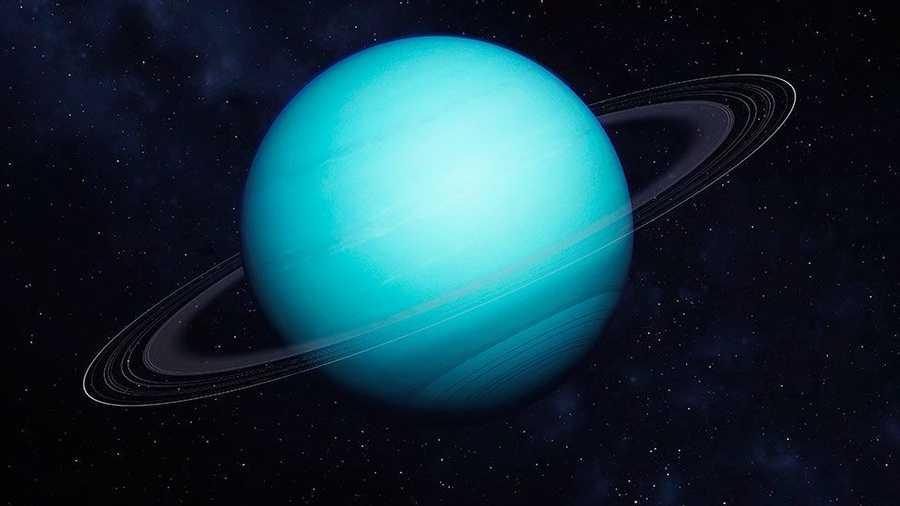 Uranus took shape when the rest of the solar system formed about 4.5 billion years ago, when gravity pulled swirling gas and dust in to become this ice giant.

Like its neighbor Neptune, Uranus likely formed closer to the Sun and moved to the outer solar system about 4 billion years ago, where it is the seventh planet from the Sun. 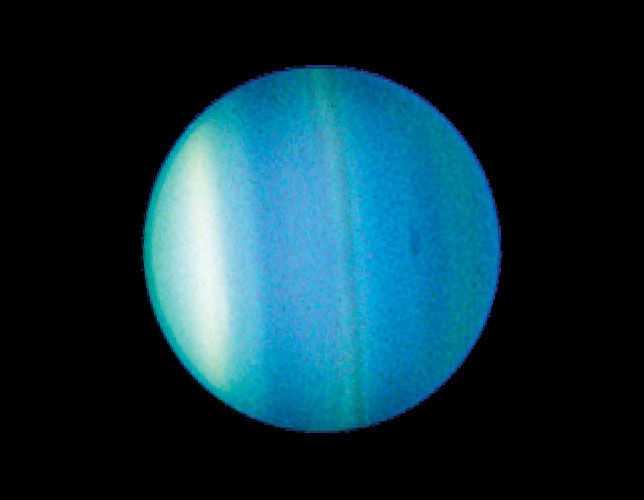 As an ice giant, uranus doesn’t have a true surface. The planet is mostly swirling fluids.

While a spacecraft would have nowhere to land on Uranus, it wouldn’t be able to fly through its atmosphere unscathed either. The extreme pressures and temperatures would destroy a metal spacecraft. 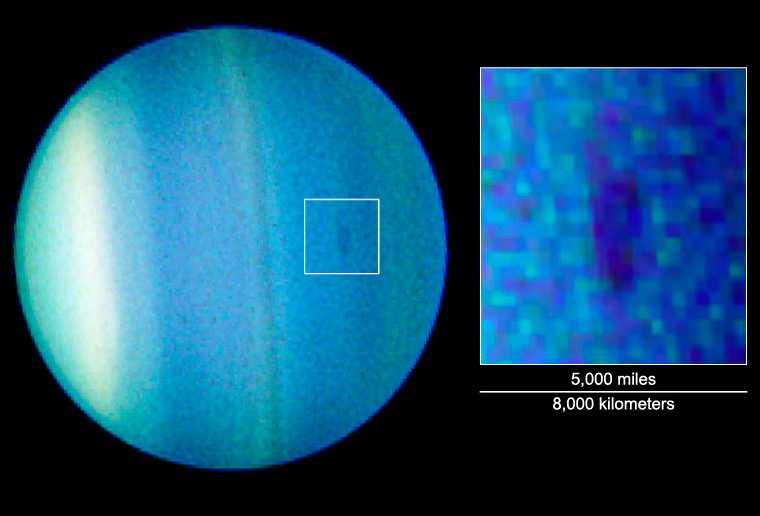 Uranus atmosphere is mostly hydrogen and helium, with a small amount of methane and traces of water and ammonia. The methane gives Uranus its signature blue color.

While Voyager 2 saw only a few discrete clouds, a Great Dark Spot and a small dark spot during its flyby in 1986, more recent observations reveal that Uranus exhibits dynamic clouds as it approaches equinox, including rapidly changing bright features.

Uranus' planetary atmosphere, with a minimum temperature of 49K (-224.2 degrees Celsius) makes it even colder than Neptune in some places.

Wind speeds can reach up to 560 miles per hour (900 kilometers per hour) on Uranus. Winds are retrograde at the equator, blowing in the reverse direction of the planet’s rotation. But closer to the poles, winds shift to a prograde direction, flowing with Uranus' rotation.

Auroras on Uranus are not in line with the poles (like they are on Earth, Jupiter and Saturn) due to the lopsided magnetic field.

The magnetosphere tail behind Uranus opposite the Sun extends into space for millions of miles. Its magnetic field lines are twisted by Uranus’ sideways rotation into a long corkscrew shape.

Uranus has two sets of rings. The inner system of nine rings consists mostly of narrow, dark grey rings. There are two outer rings: the innermost one is reddish like dusty rings elsewhere in the solar system, and the outer ring is blue like Saturn's E ring.

In order of increasing distance from the planet, the rings are called Zeta, 6, 5, 4, Alpha, Beta, Eta, Gamma, Delta, Lambda, Epsilon, Nu and Mu. Some of the larger rings are surrounded by belts of fine dust. 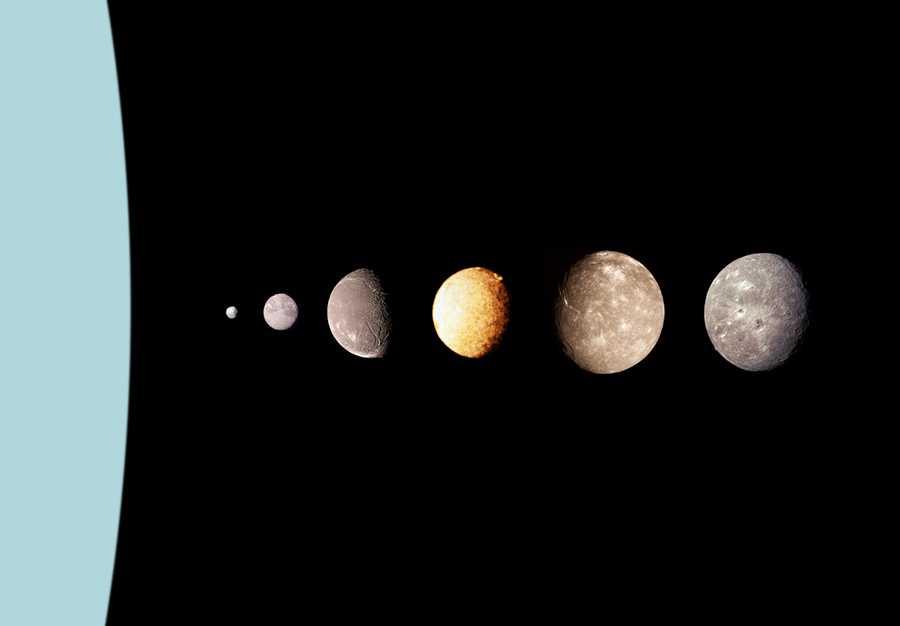 Uranus has 27 known moons. While most of the satellites orbiting other planets take their names from Greek or Roman mythology, Uranus' moons are unique in being named for characters from the works of William Shakespeare and Alexander Pope.

All of Uranus' inner moons appear to be roughly half water ice and half rock. The composition of the outer moons remains unknown, but they are likely captured asteroids. 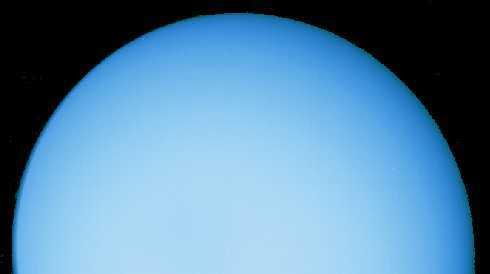 Uranus enviroment is not conducive to life as we know it.

The temperatures, pressures and materials that characterize this planet are most likely too extreme and volatile for organisms to adapt to.

I'm passionate about helping people live their best lives. I'm a lifestyle coach and fitness trainer, and I also write and take photographs. Check out the link below for more and follow me on twitter!