Jane Jacobs and her biginnings 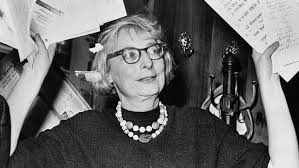 Born in a Jewish family in Scranton, Pennsylvania, Jane Jacobs is considered a founder of the New Urbanist movement.

What made her vision particular was the fact that she would look at cities as though they were living ecosystems, made up of interconnected elements. Furthermore, she was not into overcrowded cities, but rather well-planned high density. Having always been attracted by the design of the cities, she took up a career in writing on the topic once she moved in New York City and later on in Greenwich Village.

The writer Jane Jacobs has always taken a high interest in urban planning, emphasizing the necessity to take into account community's needs.

She was particularly involved in redevelopment projects such as the ones concerning the Greenwich Village and Toronto, where she participated in demonstrations against changes that did not focus on community, but on individual interests of the 'master builders'.

'The death and life of great American cities'

Jane Jacobs was a writer and activist who published seven books throughout her lifetime and many more articles on urban planning in different magazines. In her most famous book, she presents new principles of city building and rebuilding. The focus is on great cities rather than on towns or suburbs. Furthermore, conventional urban is blamed for not having taken into consideration community's needs and natural ecosystems.

From the writer's point of view, diversity is the key principle and it can be reached by making sure of the following elements: mixing uses and functions within the neighborhoods as well as older buildings with newer ones, short blocks and denser neighborhoods.

Rising Noise Around Us

There is a tendency to undervalue old ideas and fundamental wisdom, based on an assumption that old ideas will provide an average result.

In reality, old fundamentals are those great and time-tested ideas that have outlasted other bad ideas.

The one terrifying aspect of how the space we live affects our health is that many of the bad effects aren't even fully known to us, like mood swings, neuron damage, chemical imbalance and many brain-altering effects, that are yet to be fully studied.