Why Are Certain Foods Eaten Mainly at Breakfast? - Deepstash
Explore
Get Pro
For Teams 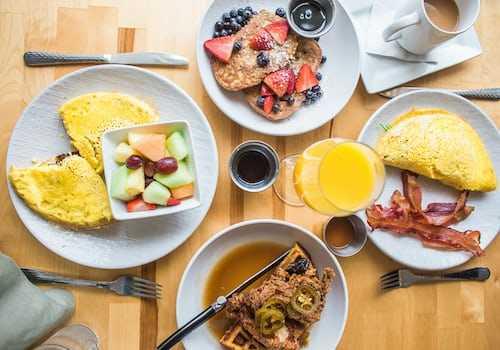 Why we eat breakfast

In North America and Europe, breakfast often consists of bacon, eggs, and toast. However, anything nutritious can be eaten in the morning. So why do Westerners then associate these foods with breakfast?

The word 'breakfast' means different things depending on the language. For example, breakfast as the day's first meal was tied to fasting before taking the Eucharist, but this same meal can mean 'small lunch' in French or even 'light supper' in Italian.

In the medieval period, breakfast included fish, beer and wine. Porridges were consumed across meals, not just at breakfast. But, during the Industrial Revolution, people began to spend less time around meals and started to eat light breakfasts.

In the 1920s, Beech-Nut Packing Company wanted to get more people to buy their bacon, so they hired a PR consultant that spread the message that a heavy breakfast would be healthier. And so the meal of bacon (and eggs) became a staple.

They opened small bakeries and made goods by hand, including bagels. But, in the '50 and '60, bagels became available pre-packed in grocery stores. The Family Circle magazine spread and popularised the idea of cream cheese, lox and bagels.

Cold cereal as a health food

Dr John Kellogg ran a sanitorium and made a type of granola out of wheat, cornmeal and oats as a remedy for chronic digestion problems resulting from high-protein diets.

But oat groats had to be soaked before cooking, so with the help of his brother, Kellogg developed a process to produce crispy wheat flakes. Four years later, they started selling toasted corn flakes, and cold cereal was born. Dr Kellogg advertised his corn flakes as healthy through cookbooks and marketing pamphlets.

In the Colonial era, Americans preferred tea. However, after England started to tax tea, Americans responded to the Boston Tea Party and drinking coffee became a patriotic duty.

In the 20th century, oranges were found to be an excellent source of vitamin C. In 1942, the U.S. Army offered money to the company that could invent frozen orange juice that tasted good. Richard Morse succeeded to manufacture frozen orange juice concentrate under Minute Made, making O.J. a popular morning drink.

Self love and fitting cup cakes in my mouth🍑