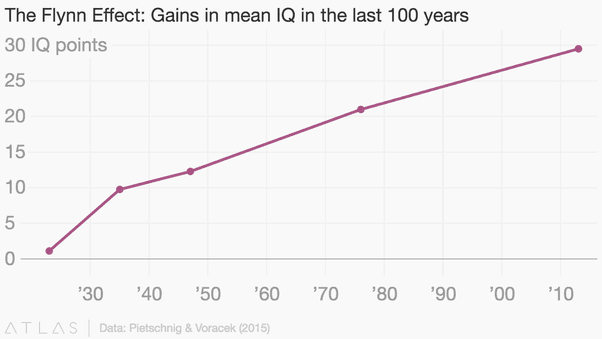 Back in the '80s, researcher James Flynn made a discovery that is now known as the Flynn effect. According to the researcher, the scores in IQ tests have known an increase in the past century.

The Flynn effect tells us that the human mind is much more adaptable and malleable than we might have thought. It seems that some of our thinking patterns aren't necessarily innate, but rather things that we learn from our environment.

An Introduction to the Flynn Effect

MORE IDEAS FROM An Introduction to the Flynn Effect

The Flynn effect and its importance

The take-away taught by the discovery of the Flynn effect refers to the fact that the IQ is not something natural. Furthermore, the IQ can and has been shaped by the different environments and, mostly, by our education.

The explanation of the Flynn effect

Researchers have come to explain the Flynn effect by means of the differences between centuries. Therefore, improvements in health and nutrition, as well as social changes, such as new mental habits, more demanding jobs or a more complex entertainment, are reasons that have led to the apparition of the effect.

There is no standard definition of intelligence

Present approaches suggest that intelligence means having the capacity to:

In the intelligence field, there is a distinction between:

We are generally advised to do self-reflection and examine our lives, but we may not be doing it right.

Rumination, the process of recurrent worrying or brooding, is the default process of the brain but can lead to impaired decision making and even depression.