Alright or All Right—What’s the Difference? - Deepstash
Explore
Get Pro
For Teams

Alright or All Right—What’s the Difference?

Alright or All Right—What’s the Difference? 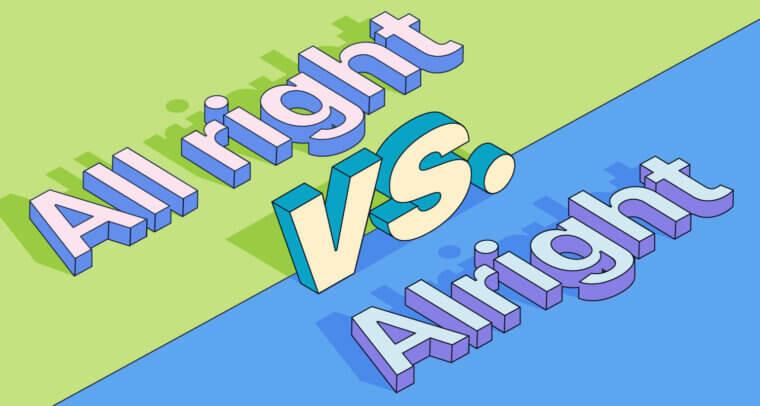 There are currently two forms of this word because the English language is continuously changing, and historically, words often had many different forms before they became standardized. For example, “altogether” was once written as “all together,” “all-together,” and “alltogether.”

The two-word spelling of “all right” takes on multiple meanings depending on the tone and written form that’s used. “All right” can be used as an adjective or adverb to mean “adequate” or “satisfactory.” It can also be used as an affirmation that suggests “correctness.”

Both forms are correct by US writing standards. The main consideration when it comes to using “all right” versus “alright” is the purpose of your writing and how it might be received by your reader.

Some posit that “alright” is an appropriate spelling for informal usage, like in a text message or brief email to a coworker or in fiction writing to characterize colloquial dialogue. Conversely, the use of “all right” is better suited for formal correspondences, such as in a professional report, official business letter, or academic paper.

“All right” and “Alright” Examples

Below are a few examples of how the various forms of “alright” and “all right” are used in sentences.

“All right” in a sentence

“Alright” in a sentence

Acronym vs. Abbreviation vs. Initialism: What’s the Difference?

Acronym vs. Abbreviation vs. Initialism: What’s the Difference?

Difference Between Its and It's Explained -

Difference Between Its and It's Explained -

Difference Between Review and Summary (With Table) – Ask Any Difference

Difference Between Review and Summary (With Table) – Ask Any Difference