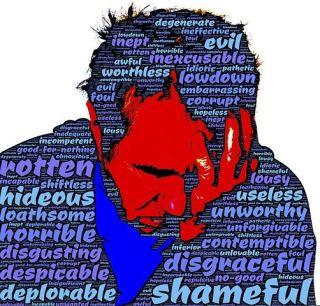 We are living in an epidemic of social alienation and depression. Cognitive psychologists tell us that depression is often a result of how we interpret the world around us and the role we play in it. Feelings of guilt, regret, and shame can fuel the fires of depression and further contribute to social withdrawal and alienation. Worry, that is, repetitive concern or rumination, then acts as a catalyst. It may be that a better understanding of what these feelings are and their relationship to one another will help us better control them and even free us from their burden.

If we read the self-help literature, we will find potentially confusing discussions of guilt, regret, and shame. It seems we have fallen prey to accepting Humpty Dumpty’s assertion “When I use a word… it means just what I choose it to mean, neither more nor less.” To clarify the confusion surrounding guilt, regret, and shame, let’s simply rely on denotation to help us clarify and differentiate.

Guilt, simply said, is a belief in culpability or responsibility for some perceived offense or wrongdoing. There are largely 4 types of guilt:

A frequent corollary of guilt is regret. Frankly, regret can be a natural and healthy response to guilt. Regret involves accepting responsibility for some perceived offense or wrongdoing and being remorseful about it. It is often related to thoughts of contrition or repentance and it often leads to subsequent corrective actions and even preventive actions in the future.

So, regret is not necessarily a bad thing, unless it leads to shame.

Shame is the angst and distress often associated with guilt. It involves humiliation, a loss of honor or respect. Shame can take stressful regret and turn it into a disaster.

Shame is not healthy. It serves no useful purpose.

In the early 1990s, Kenneth Smith and George S. Everly, as well as others, began a research project that has now spanned 30 years. Their initial goal was to discover what factors in the workplace contributed most to psychological burnout and stress-related physical illness. Having collected and analyzed survey data over the course of decades, and using statistical methods such as factor analysis and structural equation modeling, they made a startling discovery (Smith, Everly, Haight, 2012).

The Toxicity Of Worry

Smith, Everly, and Haight learned that worry (repetitive concern) was a significantly toxic psychological process that was the essence of what we called stress, and was a major determinant of burnout (personal exhaustion). Worry predicted psychological disorders and physical illness. If shame can take regret and turn it into a disaster, worry supercharges that psychological disaster and turns it into a catastrophe, often relentlessly.

What Good Is Knowledge?

In 1597, Sir Francis Bacon wrote in his Meditationes Sacrae that knowledge itself is power. It influences. It empowers. So how can information help us release guilt, regret, shame, and worry?

We can understand that guilt, regret, shame, and worry are not 4 independent stressors, but are often interrelated. They represent a virtual linear cascade that begins with guilt and, like a musical crescendo, builds in intensity and duration, culminating in shame and worry.

Rather than struggle against them all, an endeavor that will quickly exhaust us, we can focus on the causal guilt.

Are We Truly Guilty?

First, we can and should determine if we are truly culpable for the offense or wrongdoing. Sometimes we accept responsibility because we want to believe we can control all adversities in our lives. Or sometimes we accept responsibility because it’s what we or others expect. If we are not truly culpable, we can and should reject the guilt; let it go; not let the expectations of others control our lives.

Own The Wrongdoing. Apologize For It. Correct It. Do Better.

Third, if we determine that the guilt is warranted and we are 100% culpable, then we can and should simply own it; Apologize; try to correct the problem, if possible. Then we can and should borrow from Maya Angelou and say to ourselves, “If I had known better, I would have done better.” Tomorrow is a new day. It’s the first day of the rest of our lives. So let’s do better! Let’s act to prevent it from happening again in the future to us and perhaps others. Each day can be the beginning of a new life, a new us.

Know better and do better.

Guilt, regret, shame, and worry are not 4 independent stressors, but are often interrelated. They represent a virtual linear cascade that builds in intensity and duration, like a musical crescendo. Which of the 4 do you believe the crescendo is? You’d be surprised.

Get Over Guilt with These Steps

Guilt Vs. Shame: What’s The Difference And Why Does It Matter? | Betterhelp