"It is the lot of 'man' to strive no matter how content he is." 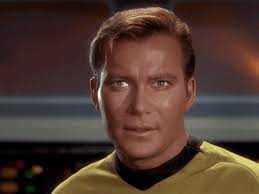 "To boldly go where no man has gone before."

"I canna' change the laws of physics."

"We prefer to help ourselves. We make mistakes, but we're human—and maybe that's the word that best explains us."

"Logic is the beginning of wisdom, not the end."

"I am pleased to see that we have differences. May we together become greater than the sum of both of us."

"Computers make excellent and efficient servants, but I have no wish to serve under them."

"Improve a mechanical device and you may double productivity. But improve man, you gain a thousandfold."

"You can use logic to justify almost anything. That's its power. And its flaw."

"There is a way out of every box, a solution to every puzzle; it's just a matter of finding it."

"It is possible to commit no errors and still lose. That is not a weakness. That is life."

"Without freedom of choice there is no creativity."

"One man cannot summon the future."

"But one man can change the present!"

"Things are only impossible until they're not."

"Change is the essential process of all existence."

Where No Man Has Gone Before: Star Trek

In the late 80s, Patrick Stewart was the classy and dashing Captain Picard, the main character of the Star Trek series, which started in 1966, originally starring Captain Kirk (and Spock!). The idea of exploring strange new worlds in the galaxy, speeding at warp-speed in a beautiful ocean cruiser-like spaceship was too good to resist.

Captain Picard may be fictional, but he’s my mentor nonetheless. He was portrayed as having an introverted, intuitive, thinking, and judging (INTJ) type personality and his analytical problem-solving skills provide leadership lessons to us even now.

"The individual has always had to struggle to keep from being overwhelmed by the tribe. If you try it, you will be lonely often, and sometimes frightened. But no price is too high to pay for the privilege of owning yourself."

Nonconformity Quotes to Help You Resist the Crowd

“Since you get more joy out of giving joy to others, you should put a good deal of thought into the happiness that you are able to give.”

57 Giving Quotes: An Inspiring Guide to Helping the People You Love