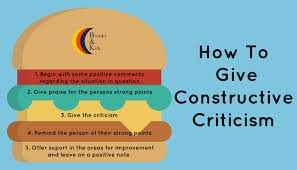 Use The "Sandwich" Approach And Be Specific On The Expected Results

"Sandwiching" your critique between two positive things about the person's softens the blow, and avoids it coming off like an attack. The mix of positive and negative makes people more likely to pay attention to the whole package.

Instead of being snarky and vague, explain why you think your criticism is valid and be specific and constructive about what you think would be an improvement. The former doesn’t inform much and makes people unhappy; the latter at least gives some ideas for improvement.

How to Give Criticism Without Sounding Like a Jerk

Give Kind Criticism, And Remember The Point Of It

The point of your criticism is to help someone improve, or to correct a problem, and your feedbacks should carry that message. If you’re doing anything but that, reevaluate whether you actually have legitimate criticism to give, or you just need to talk to someone.

Give Feedback, Not Instruction

Keep your criticism to your observations, and the impact they have. Don't try to fix the problem, just identify it.

Criticism by nature can be personal, but delivering it you need to separate your thoughts on someone's work or behavior from what you think of them.

How to Give Constructive Criticism: 6 Helpful Tips | Personal Excellence

The Three Keys to Giving Feedback to Overly Defensive People

Constructive criticism assumes that the person giving it has chosen to talk about it because it wants to help the other in reaching the good or help to progress.

Constructive Criticism: What it is and How to Take it